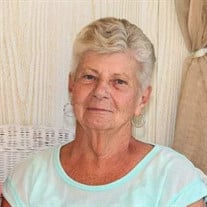 Ethelyn “Jan” J. Vagt, age 82 of Monroe, went home to be with the Lord on Friday, November 30, 2018. She had been in poor heath for eleven months. Born January 28, 1936 in Monroe, she was the daughter of the late Richard C. and Lila B. (Weaver) White Sr. Jan attended Monroe High School, graduating with the class of 1954. She married her beloved husband of sixty- two years, Karl H. Vagt Sr. on December 10, 1955 in Angola, Indiana. She was a life-long homemaker and was a member of Prince of Peace Lutheran Church since 1965. Jan Enjoyed spending her winters in Florida and loved going out to dinner and going shopping. To cherish her memory, Jan leaves five children: Ronald A. (Laura) Smith of Monroe, Victoria E. Vagt of Ida, Karl H. (Sheila) Vagt Jr. of Monroe, Charles R. (Janet) Vagt of Ida and Carol A. Kimberlin of Loughman, Florida; sixteen grandchildren; thirty-nine great-grandchildren; and one great-great-grandchild. In addition to her parents, Jan was preceded in death by one brother, Richard C. White, Jr. Visitation will be held on Sunday, December 2, 2018, from 4-8PM and Monday, December 3, 2018 from 3-8PM at Bacarella Funeral Home, 1201 S. Telegraph Road, Monroe, MI, 48161. Services celebrating Jan’s life will be held at 11 AM on Tuesday, December 4, 2018, also at Bacarella Funeral Home. Rev. Ted Kerr, Pastor of Prince of Peace Lutheran Church, will officiate. Interment will follow at Roselawn Memorial Park, LaSalle. Memorial contributions in Jan’s memory are suggested to an organization of the donor’s choice. Online condolences, and special memories, may be shared with the family by visiting the obituary page at www.bacarellafuneralhome.com.

The family of Ethelyn "Jan" J. Vagt created this Life Tributes page to make it easy to share your memories.

Send flowers to the Vagt family.