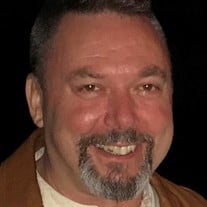 Emanuel Zachary Manos, known to most as EZ, was welcomed into Heaven on Sunday, May 12, 2019. EZ was born in Eloise, Michigan on May 8, 1965 to Marion Margaret Pavelka and the late Richard Warren Manos. He has five siblings: Anthony (Kristen) Manos of Chattahoochee, Florida; Richard Manos of Boise, Idaho; Mary Roux of Northville, Michigan; Helen (Ron) Kurkowski of Milford, Michigan; and Kathy (Ed) Jezik of Wentzville, Missouri. EZ began his education at St. Alfred’s Catholic School from 1st-8th grade and graduated high school at Gabriel Richard in Riverview, Michigan. There he excelled at baseball and football. During the summer he spent his time on Pavelka and Maupin farms in Standish, Michigan, and Middletown, Missouri. He worked alongside his Uncles, Tom, Mike and Andrew Pavelka, on a dairy farm. It was here that he developed his love for the farm life, fishing and euchre. In Middleton, Missouri, EZ would help his Aunt, Agnes Maupin, on her horse farm. He would often tell stories about rattlesnakes and floating down the river on a make-shift raft. It was these summer experiences and the influence of his mother, aunts and uncles that made him the man that he was. In 1983 EZ followed his brother Tony to Michigan Technological University in Houghton, MI. EZ graduated with a bachelor’s degree in mining engineering. His love for geology extended far beyond the classroom and over the years manifested itself in rock hunts, collections and the purchase of the Caledonia Copper Mine. His first experience with underground mining was at the White Pine Copper Mine in the Upper Peninsula, from there he was hired by Kiewit Corporation and participated on numerous engineering projects including the Southern Expansion of the Florida Turnpike (FL), Bad Creek; a hydro electric power house inside of a mountain (Clemson, South Carolina), and US-75 Water Collection and Drainage Tunnel under I-75 (Dallas, TX). Furthermore, Yucca Mountain Nuclear Waste Facility outside of Reno, Nevada, Akzo Nobel Salt Mine under Lake Erie (Cleveland, OH) and Dravo Cool Line Engineering/Tunneling (Mayville, KY). Amongst his travels and early in his career he met his soul mate, Sheri (Sherinka) Manos. They joined their hands in marriage at St. Stephens Church in Miramar, Florida, on December 23, 1989. After returning to Michigan, EZ helped to re-open Detroit Salt Mine in 1997 and then dedicated 22 years of his life to Detroit Salt Company (DSC). He relentlessly worked and was proud to be named the President of DSC in 2010. During his career he consecutively broke production records, won the Centennials of Safety Award six times, was presented a Michigan Manufacturer of the Year award in 2016 and invited to speak at the World Salt Symposium, as well as being feature in multiple publications and documentaries. More impressive than his successful career was the impact that he had on his family, friends, co-workers and strangers alike. EZ lived his faith continuously and worked tireless to bring Christ to others. He was known for his generosity and welcoming nature accepting everyone person as they were. He loved helping those in need and supported as many causes as he could; including religious organizations, non-profits, education and homeless. In addition to his kindness, EZ was an animated storyteller believing that the best moments in life were made timeless through stories. In honor of EZ and his love of story telling please share a special memory or story with his family through online condolences by visiting the obituary page at www.bacarellafuneralhome.com. Emanuel has joined his daughter Gianna Faustina Manos in Heaven and leaves his memory to be cherished by his loving wife of 30 years, Sheri and their seven children: Katelyn (Mark); Bethany; Emerson; Noelle; Preston; Darius and Julia along with his mother, Marion, and his five siblings (aforementioned). Additionally, he leaves behind many nieces, nephews, cousins and friends whom he loved unconditionally. Visitation will be held Thursday, June 6, 2019, from 4:00 p.m. – 8:00 p.m. and Friday, June 7, 2019, from 12:00 p.m. – 8:00 p.m. at Bacarella Funeral Home, 1201 S. Telegraph Road, Monroe, MI, 48161, where the Rosary will be recited at 7 p.m. followed by EZ's eulogy. EZ will lie in state at 9:00 a.m. on Saturday, June 8, 2019, at St. Mary Magdalen Parish where Mass of Christian Burial will be celebrated at 10:00 a.m. by the church pastor, Rev. Father Ed Zaorski. A private burial will take place on Sunday, June 9, 2019 in Standish, Michigan. Memorial contributions in EZ's memory are suggested to the family as they will distribute the funds to his favorite charities.

Emanuel Zachary Manos, known to most as EZ, was welcomed into Heaven on Sunday, May 12, 2019. EZ was born in Eloise, Michigan on May 8, 1965 to Marion Margaret Pavelka and the late Richard Warren Manos. He has five siblings: Anthony (Kristen)... View Obituary & Service Information

The family of Emanuel Z. "EZ" Manos created this Life Tributes page to make it easy to share your memories.

Emanuel Zachary Manos, known to most as EZ, was welcomed into...

Send flowers to the Manos family.