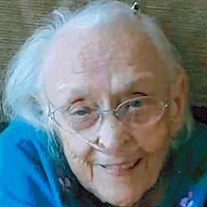 Elma M. “Sally” Rauch, age 87 of Erie, MI, passed away peacefully at the home of her granddaughter in Warren, MI on December 22, 2019. She had been in declining health for three years. Born May 10, 1932 in Dundee, MI, Sally was the daughter of the late Elmer and Thelma (Jackson) Winkelman. She graduated from Monroe High School in 1950 and married Maurice A. Rauch on October 8th of that year. He preceded Sally in death in August of 1976. For most of her life, Sally was an active member of First Presbyterian Church in Erie. She embraced all aspects of being a homemaker. Her favorite hobbies included sewing, baking, quilting, cooking, crafting, and flower and vegetable gardening. Sally is survived by two daughters, Bonnie White of Richmond, MI and Becky (Jim) Hilton of New Port Richey, FL; a brother, Jerald Winkelman of Luna Pier, MI; four grandchildren, Michael, Rachael, Dawn, and Sherry; eight great-grandchildren and one great-great-grandchild. In addition to her parents and husband, Sally was also preceded in death by a brother, John Winkelman. Family and friends may visit from 11 a.m. until time of service at 1 p.m. Monday at Bacarella Funeral Home. Lay Pastor, Brenda Wilkison will officiate followed by burial at Erie Union Cemetery. Memorial donations are suggested to First Presbyterian Church, Erie. Online condolences and special memories may be shared with the family by visiting the obituary page at www.bacarella funeralhome.com.

The family of Elma M. Rauch created this Life Tributes page to make it easy to share your memories.

Send flowers to the Rauch family.