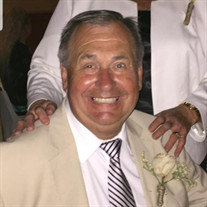 Edward Joseph Oley, age 77, of Monroe, went home to be with the Lord on June 24, 2020 at his home in Monroe. Edward was born on May 8, 1943 in Monroe. He was the son of the late James and Mary (Weisbecker) Oley. Edward attended Monroe Catholic Central, graduating with the class of 1962. After graduation he began working at La-Z-Boy Incorporated. In 1978 Edward changed career paths and began working for Ford Motor Company in Milan, MI. from which he retired in 2000. Edward was a great family man and a loving father and grandfather. He married Jeannette Kregel in 1964 and the couple had four children. In 1979, he married Dianne K. Harper and the two have been inseparable ever since. He was a social and active man who was deeply involved in classic car clubs and was often found socializing with friends. Edward enjoyed working in his garden and driving his golf cart. His family and friends will always remember him as a generous, loving, sweet man. Edward received his spiritual nourishment from Christ Lutheran Church, where he was a member. To cherish his memory, Edward is survived by his loving wife, Dianne of Monroe; one brother, David (Pam) Oley of Monroe; six children, Patrick, Ronald, Shannon, Teri, John Harper, and Randy Harper; seven grandchildren: Candace, Samantha, Randal, McKenzie, Emily, Erin, and Payton; eight great-grandchildren; two uncles, Bill Metz and Ben Oley; one aunt, Phyllis Amrhein; and longtime friend of 42 years, Brian Finn. In addition to his parents, Edward was preceded in death by his stepmother, Ethel Oley. Visitation will be held at Bacarella Funeral Home, 1201 South Telegraph Road, Monroe MI 48161 on Friday, June 26, 2020, from 2 p.m. until 7 p.m. Services celebrating his life will be held, Saturday, June 27, 2020 at Bacarella Funeral Home at 11 a.m. Entombment will follow at Roselawn Memorial Park, LaSalle. In lieu of flowers, memorial contributions in Edwards memory are suggested to a charity of the donor’s choice. Online condolences and special memories may be shared with the family by visiting the obituary page at www.bacarellafuneralhome.com.

Edward Joseph Oley, age 77, of Monroe, went home to be with the Lord on June 24, 2020 at his home in Monroe. Edward was born on May 8, 1943 in Monroe. He was the son of the late James and Mary (Weisbecker) Oley. Edward attended Monroe Catholic... View Obituary & Service Information

The family of Edward Joseph Oley created this Life Tributes page to make it easy to share your memories.

Send flowers to the Oley family.