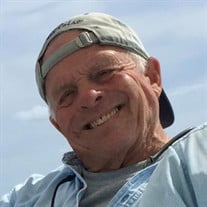 Edward Francis Heil, age 91 of Monroe, passed away at home surrounded by his loving family, Friday, December 17, 2021. Ed was born December 3, 1930 from the union of Helena (Lapointe) and Bernard Heil of Monroe Michigan. Edward attended St. Mary Catholic grade school and was in the first graduating class of Monroe Catholic Central High School. Immediately after, he entered the U.S. Marine Corps, and served 3 years during the Korean War. Upon honorable discharge, Ed went to work for Ford Motor Company, and retired 36 years later from the Ford Dearborn Glasshouse as a financial analyst. He married his high school sweetheart, Rosemary Powers and had 4 children. They were married 44 years, until Rosemary’s passing. Ed was blessed to meet and marry Jacqueline Hill. Jackie also had previously lost her husband. This second union blended two families into one LOVING family. This blended family blossomed into 11 children, 26 grandchildren, and 25 great-grandchildren. Ed was an avid golfer, hunter, fisherman, watercolor artist, but the passion of his life was sailing on his American Pie sailboat. His family felt there was nothing he couldn’t do, and he proved them right over and over again. Ed Heil was NOT the average man!!! Edward was preceded in death by his parents, brothers William and Richard, wife Rosemary, son in law Randy Wylie, and grandson Joey Bourgeois. He is survived by his wife Jackie, sons Michael, Mark, Norman, and daughters Teresa, Diane, and Jodi. All are welcome to attend a Memorial Mass in honor of Ed at 11 a.m. Friday, Jan. 7th at St. Mary Catholic Church. The church Pastor, Rev. Fr. David Burgard will officiate. The family will receive visitors beginning at 10 a.m. prior to the Mass. A fellowship luncheon will immediately follow in the church Parish Life Center in celebration of Ed’s life. In lieu of flowers, memorial donations are suggested to St. Mary Catholic Church. Bacarella Funeral Home is assisting the family. Online condolences and special memories may be shared with the family by visiting the obituary page at www.bacarellafuneralhome.com.

The family of Edward Francis Heil created this Life Tributes page to make it easy to share your memories.

Send flowers to the Heil family.