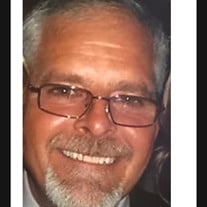 Edward A. Bitz, age 61 of Monroe, passed away peacefully at 8:15 p.m. Thursday, April 22, 2021 in his home surrounded by his family. His passing was due to Cholangiocarcinoma, an illness that he courageously battled for four years. Born March 7, 1960 in Monroe, Ed was one of six children from the union of Edward and Marie (Durocher) Bitz. He graduated from Monroe High School in 1978 and was a member of St. Mary Catholic Church and a life member of the Monroe County Rod and Gun Club. On September 30, 1995, Ed married Stacy R. Graves at Grace Lutheran Church. Early in his life, Ed was employed by Mack’s Body Shop in Monroe for four years before beginning a 30 year career at North Star/Gerdau Steel. Ed reached the position of Supervisor before having to medically retire due to his illness. Ed possessed a passion for the outdoors and enjoyed hunting, fishing, and trapshooting. A spirited University of Michigan Football fan, he also enjoyed playing softball in the Frenchtown Men’s Recreational League, listening to music, riding his Harley, and attending muscle car auto shows. Ed was known to be a “Jack of All Trades” and an overall handyman. He was generous with his personal time, often coming to the rescue of many family and friends who needed something fixed. He had a soft heart for animals and loved his three pet dogs. Ed is survived by his loving wife, Stacy; four children: Arrica (Michael) Preston of Columbus, Ohio, Ana Bitz, Aaron Bitz, and Alexa Bitz, all of Monroe; five siblings: Joseph (JoAnn) Bitz of Monroe, Richard (Jill) Bitz of Benton, Kentucky, Michael (Lori) Bitz of Erie, Kristine (Gregory) Monday of Monroe, and Kellie (Dale) Bashaw of Monroe; and the greatest joys of his life, his three beloved grandchildren, Braylon, Broxton, and Brooklyn Preston. Ed will also be missed by many aunts, uncles, nieces, nephews, and all of the Graves family. Ed was preceded in death by his parents and a special friend and mentor, Carl Kroeger. Family and friends are invited to visit from 1 p.m. to 7 p.m. Tuesday at Bacarella Funeral Home. A celebration of Ed’s life will begin at 7 p.m. with Rev. Larry Detruf officiating. U of M or Cammo attire is suggested. Cremation will follow in accordance with Ed’s wishes. An additional celebration/dinner of Ed’s life will take place from 1 p.m. to 4 p.m. Saturday, May 1st at the Monroe County Rod & Gun Club. For memorials, the family encourages donations be made to the Humane Society of Monroe County.

Edward A. Bitz, age 61 of Monroe, passed away peacefully at 8:15 p.m. Thursday, April 22, 2021 in his home surrounded by his family. His passing was due to Cholangiocarcinoma, an illness that he courageously battled for four years.... View Obituary & Service Information

The family of Edward A. Bitz created this Life Tributes page to make it easy to share your memories.

Send flowers to the Bitz family.