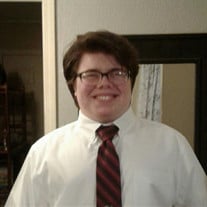 Drake Edward Matthew Post, age 18, of Newport, went home to be with the Lord on Saturday, August 1, 2020, at Mott Children’s Hospital, Ann Arbor. He had been critically ill for the past two months. Born March 19, 2002 in Ann Arbor, he is the son of Brian E. Post and Carla D. Brantley-Post. He attended Jefferson High School and was a lifelong member of Zion Lutheran Church. Drake worked for himself as a graphic and cartoon designer. He loved watching Sci-fi movies and shows, playing video games. He was a talented artist and created intricate renderings that were admired by many. Drake was so gifted at drawing that the Cleveland Art Institute was looking forward to him attending college at their campus. He enjoyed participating in Dungeons and Dragons, as well as Comecon Conventions, even winning first place here in Monroe. Drake was a prankster and genuinely enjoyed putting smiles on others faces. To cherish his memory Drake leaves his loving mother and father, Carla of Newport and Brian of Monroe; one brother, Logan Post of Newport; grandparents: Joe and Fran Chavis of Iron River, Michigan, Richard and Georgia Hoffman of Monroe, and Sue Post of Luna Pier; and many aunts, uncles and cousins. He was preceded in death by a aunt, Brenda Brantley and grandfathers, McKinzie Brantley Jr. and Pete Post. Memorial contributions in Drake’s memory are suggested to the family. In accordance with his wishes, cremation has taken place and a Memorial Visitation will be held from 10 a.m. until services celebrating his life begin at 11 a.m. Friday, August 7, 2020, at Zion Lutheran Church, 186 Cole Road, Monroe, MI 48162. Bacarella Funeral home is assisting the family with arrangements.

Drake Edward Matthew Post, age 18, of Newport, went home to be with the Lord on Saturday, August 1, 2020, at Mott Children&#8217;s Hospital, Ann Arbor. He had been critically ill for the past two months. Born March 19, 2002 in Ann Arbor,... View Obituary & Service Information

The family of Drake Edward Matthew Post created this Life Tributes page to make it easy to share your memories.