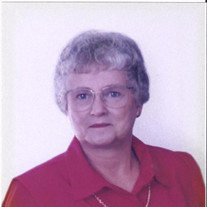 Dorothy Ann Stadler, age 89, formerly of Monroe, was taken to heaven on Saturday, September 5, 2020. Dottie was born on November 8, 1930, in Marion, Ohio. Her parents were Loy D and Floreine (Spain) Rhoads. Dottie graduated from Harding High School in Marion in 1948. Later that same year, she matriculated into Bowling Green State University from which she graduated in 1952 with a BS in Education. From 1952 through 1962, Dottie taught third grade at Custer Consolidated School System, which is now part of the Monroe Public School System. She deeply and genuinely cherished both her time teaching and her many students. Simultaneous with teaching, Dottie pursued a Master of Arts in Education at Eastern Michigan University, graduating with that degree in 1962. On June 16, 1962, Dottie married Robert Edgar Stadler of Monroe. In 1963, Bob and Dottie moved to Hartwell, Georgia. While living in Georgia, Dottie and Bob had three children and subsequently returned to Monroe in 1972. In 2011, Bob and Dottie moved to Wyoming, Michigan, to be near their children and grandchildren. Dottie is predeceased by her husband, Robert; her parents Loy and Floreine Rhoads; her older brother, Theodore D Rhoads; and her twin brother, Richard Arlis Rhoads. Dottie is survived by her younger brother and sister-in-law, Robert Loy (Linda) Rhoads of Marietta, Ohio; her three children and two daughters-in-law: James Robert (Laura) Stadler, Carol Ann Stadler and Richard William (Sharon) Stadler; and five grandchildren: Ian, Cameron, Landon, Heather and Connor. A faithful Christian, Dottie embraced her faith and her roles as wife, mother, and grandmother. Dottie will be dearly missed by her friends and family. Visitation will be held from Noon – 2:00 p.m. on Wednesday, September 9, 2020, at Bacarella Funeral Home, 1201 S. Telegraph Road, Monroe, MI, 48161, to be immediately followed by a service at 2:00 p.m. also at Bacarella Funeral Home. In lieu of flowers, memorials can be sent to Stewart Home School, 4200 Lawrenceburg Road, Frankfort, Kentucky 40601.

The family of Dorothy Ann Stadler created this Life Tributes page to make it easy to share your memories.

Dorothy Ann Stadler, age 89, formerly of Monroe, was taken to...

Send flowers to the Stadler family.