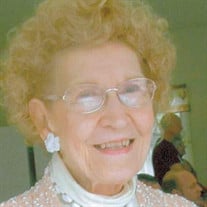 Dorothy L. Shaw, 94 of Monroe, went home to be with the Lord at 9:55 a.m. on Sunday, June 30, 2019, at Fountainview of Monroe. She had been in poor health for one month. Born May 23, 1925 in Toledo, Ohio, she was the daughter of the late Ferris and Vera (Monthaven) Jones. After moving to Monroe in 1940, Dorothy attended Monroe High School. She married her beloved husband, Glenn Shaw, on September 28, 1942. Sadly, after fifty-seven years of marriage, he preceded her in death on July 18, 1999. Dorothy worked outside the home as a Waitress at Edison Restaurant, Toledo, from 1957-1959, Coney Island Lunch from 1960-1969 and as a Dietary Aide at the Lutheran Home from 1979-1983. However, her true passion was caring for and spending time with her family and always made sure she has supper ready on time. She loved to travel and took many road trips with her husband. She even earned the CB Radio handle “Little Shopper” for Glenn due to her love of shopping and Glenn said she would be “Big Shopper” if he would have given her more money to spend. Dorothy will be remembered as a kind and loving woman who never had a harsh word for anyone. She cherished spending time with her family telling jokes and would often say, “A day was wasted when you did not laugh.” Dorothy enjoyed quilting and ceramics, spending many hours at craft shows displaying her pieces. She even made a dozen dioramas this past Christmas for her “girls.” To cherish her memory, Dorothy leaves two children, Robert L. (Carol) Shaw of Monroe and William J. Shaw of Toledo, Ohio; six grandchildren: Michael (Katie) Shaw, Kristen (Deric Kmetz) Shaw, Jason Hunt, Stephanie (Mickele) Arcabascio, Robin (Rod) Emery and Renee (Randy) Mullendore; ten great-grandchildren and many great-great-grandchildren. In addition to her parents and husband, she was preceded in death by her daughter, Vicki Hunt; a brother, James Jones and a sister, Tina Jones. Memorial contributions in Dorothy’s memory are suggested to a charity of the donor’s choice. Visitation will be held from 1 until 8 p.m. Wednesday, July 10, 2019, at Bacarella Funeral Home, 1201 South Telegraph Road, Monroe, MI, 48161. Services celebrating her life will begin at 11 a.m. Thursday, July 11, 2019, also at Bacarella Funeral Home. Rev. BJ McDaniel will officiate. Interment will follow at Woodland Cemetery.

The family of Dorothy L. Shaw created this Life Tributes page to make it easy to share your memories.

Send flowers to the Shaw family.