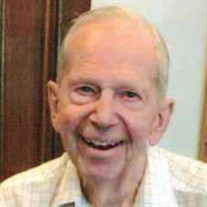 Donald A. Toeppe, Sr. age 97 of Monroe, passed away Wednesday afternoon at Wellspring Lutheran Home. He had been in poor health for the past two weeks. Born July 9, 1924 in Toledo, OH, Don was the son of the late Lawrence and Mary (Dudley) Toeppe. During his high school years, Don studied at the Brunnerdale Seminary in Canton, OH before enlisting in the U.S. Marine Corp. He served during World War II from March 23, 1944 until being honorably discharged on July 26, 1946. During the invasion of Okinawa in the South Pacific, Don was positioned as security for the Company Commander of the 2nd Marine Division, 8th Regiment. During the Monroe Memorial Day Parade of 2017, he was honored when he was asked to serve as Grand Marshall. Two months after being discharged, Don married Norma J. Vallance on September 19, 1946 in Millersville, OH. Together, they raised five children, making sure they had a Christian education. After her passing on July 11, 1993, Don later married E. Jean Dushane on December 22, 1993 at St. Paul’s United Methodist Church in Monroe. During their 25 year marriage, they resided in Leesburg, FL for approximately 20 years before returning to Monroe in 2014. Sadly, on July 21, 2018, Jean also passed. As a young man, Don worked in various capacities as a truck driver and had his own shoe repair shop. He went on to have a long and prosperous career as an insurance agent in Monroe for National Life & Accident Insurance Company, retiring in 1983. Don was a member of St. Mary Catholic Church where he served as an Usher, Lector and Eucharistic Minister. He was also a member of Monroe VFW Post 1138 and Monroe Council 1266 Knights of Columbus. In addition, he was a former Boy Scout Troop Leader and volunteer school bus driver for Monroe Catholic Central High School. A devout Catholic and humanitarian, Don was instrumental in founding Damascus House, Philadelphia House, and other charitable entities in the Monroe area to assist the homeless. He enjoyed telling a good joke, making up games for his children and grandchildren, and traveling in his motor home. Don is survived by his children: Ruth (Don) Silsbe of Tryon, NC, Donald (Sharon) Toeppe, Jr., David (Kathy) Toeppe, Sr., JoAnn (Ron) Thornton, and Daniel (Michele) Toeppe, all of Monroe; 7 siblings: Victor (Helen) Toeppe of Texas, Sr. Mary Laurene Toeppe, Dorothy (Howard) Ameling, Raymond (Shirley) Toeppe, Juliana Wright, Angela (Andrew) Klisz, Jr., and Ursula (Larry) Wolfe, all of Ohio; 13 grandchildren: Amy Jo Silsbe, Scott Silsbe, Joseph Toeppe, David Stephen Toeppe, Luke Toeppe, Leigh Tipper, Jennifer Dostert, David Toeppe, Jr., Jason Thornton, Becky Quick, Charles Toeppe, Caitlin Toeppe, and Candace Toeppe; 18 great-grandchildren; 1 great-great-grandchild; and two step-sons, Mark and Greg Dushane. In addition to his parents and wives, Don was also preceded in death by two grandchildren, Lorin Toeppe and Keliegh Toeppe, and brothers, Larry and Ken Toeppe. Family and friends may visit from 2 p.m. to 7 p.m. Sunday, Aug. 29th at Bacarella Funeral Home. Don will lie in state at 10 a.m. Monday at St. Mary Catholic Church. Mass of Christian Burial will be celebrated at 11 a.m. by Rev. Fr. David Burgard. Burial will follow at Roselawn Memorial Park where VFW Post 1138 will pay tribute to their fallen comrade. Memorial donations are suggested to Wellspring Lutheran Home with memo to “Activities” or to VFW Post 1138. In closing, as Don would say, “Praise The Lord”.

Donald A. Toeppe, Sr. age 97 of Monroe, passed away Wednesday afternoon at Wellspring Lutheran Home. He had been in poor health for the past two weeks. Born July 9, 1924 in Toledo, OH, Don was the son of the late Lawrence and Mary (Dudley)... View Obituary & Service Information

The family of Donald A. Toeppe Sr. created this Life Tributes page to make it easy to share your memories.

Donald A. Toeppe, Sr. age 97 of Monroe, passed away Wednesday...

Send flowers to the Toeppe family.