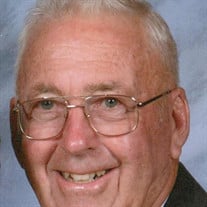 Donald J. Secord, 91 years of Monroe, Michigan, went home to be with the Lord on Saturday, April 10, 2021 at Fountain View of Monroe. Born August 31, 1929 in Saginaw, Michigan, Don was the son of the late Wilbert and Genevieve (Story) Secord. Don was a 1948 graduate of St. Louis High School in St. Louis, Michigan and he attended Michigan State University in its Short Course Program, receiving a degree in Agriculture. On February 18, 1950 Don married the former, Leona M. Werner at Trinity Lutheran Church in Monroe. Sadly, she preceded him in death on November 16, 2006 after 56 years of marriage. Don then married his beloved wife, Elizabeth L. “Betty” (Quillin) Franzen on January 24, 2009 at Grace Lutheran Church and at St. Michael the Archangel Catholic Church. Don owned and operated the family farm in Monroe for many years. He also worked as a salesman and oil truck driver for Monroe Marathon and Barron Oil in Monroe, from which he retired in 1995. Don was an active member of Grace Lutheran Church, where he served as an Elder. Don was also very civic minded and served the Monroe Community in many ways. He was an officer for the Federal Land Bank, served as Raisinville Township Treasurer, Trustee and on the Board of Review, served on the board at the Lutheran Home, served on the River Raisin Watershed Committee, and on the Election Board. For 30+ years Don served as an officer and member of the L. M. R. Fire Department. When he wasn’t serving his community, Don enjoyed farming, gardening, and bowling. Don will be remembered as a kind man, with an infectious smile, that loved people, especially family. Don is survived by his beloved wife of 12 years, Betty, four loving children: Daniel J. (Teresa) Secord of Monroe, Donna M. (Rev. Dale) Koehneke of Salem, OR, Cynthia S. (Timothy) Ernst of St. Joseph, MI, and Donita A. (Rev. Robert) Auxter of Monroe, seven loving step children: David Shankleton of Monroe, Michael (Chris) Shankleton of Monroe, Gerald (Allie) Franzen of Flint, Linda (Gregory) Nisley of Gaylord, Vicki Franzen of Monroe, Joyce (Bart) Nickerson of Clinton, MI and Carol (Timothy) Anteau of Monroe, 36 cherished grandchildren, 53 treasured great grandchildren, with one on the way, two adored great great grandchildren, a brother, Jack (Judy) Secord of Greenville, MI and a sister, Patricia Fessler of Naples, FL. In addition to his parents and first wife Leona, Don was preceded in death by a grandson and a brother in law, Dr. John Fessler. Visitation will be held on Friday from 2-8 pm at Bacarella Funeral Home, 1201 S. Telegraph Rd., Monroe, Michigan, 48161, where at 6:30 pm the L. M. R. Fire Department will make a ceremonial pass by. On Saturday, April 17, 2021, Don will lie in state from 10:00 am at Grace Lutheran Church in Monroe, where funeral services celebrating his life will begin at 11:00 am. The Rev. Mark Witte, pastor of the church, will officiate. Interment will follow at Gethsemane Cemetery in Monroe. In lieu of flowers, memorial contributions are suggested to Grace Lutheran Church or ProMedica Hospice.

Donald J. Secord, 91 years of Monroe, Michigan, went home to be with the Lord on Saturday, April 10, 2021 at Fountain View of Monroe. Born August 31, 1929 in Saginaw, Michigan, Don was the son of the late Wilbert and Genevieve (Story)... View Obituary & Service Information

The family of Donald J. Secord created this Life Tributes page to make it easy to share your memories.

Send flowers to the Secord family.