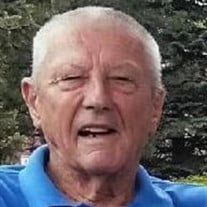 Donald E. Heiden, age 93, of Monroe, passed away Tuesday February 23 at Alice Lorraine Care Center. He was born August 18, 1927 in Monroe. He was the son of Edwin and Lela (Vietz) Heiden. He married Doris E. Petee June 30, 1951 at St. Alphonsus Church in Deerfield; she passed October 27, 2017. He served his country in the US Navy from June 21, 1945 to August 22, 1946 and then he also reenlisted in the US Air Force January 3, 1951 until his discharge December 10, 1954. Donald was a rural postal carrier for 22 years before his retirement in 1977. He was a life member of the VFW, also a member of the American Legion, Monroe Boat Club, Moose Lodge, Shalamar Creek Golf Club in Lakeland Florida and Sugar Springs Golf Community in Gladwin. He enjoyed bowling, reading and golfing. Donald is survived by his children, Gregory Heiden of Monroe, Jeffery (Liz) Heiden of Monroe, Kim (Ed) Tomalak of Carmel, Indiana and Lynn (Tom) Brennan of Monroe; brother in law, Urvin Reau of Britton, MI, sisters in law, Kay Heiden of Monroe and Carol Petee of Petersburg; sixteen grandchildren, twenty five great grandchildren and two great great grandchildren. In addition to his wife, he is preceded in death by his parents, brother, Glenn Heiden and sister, Deloras Fitzgerald. The family would like to thank the staff at Alice Lorraine Care Center for the loving care they showed our father during the last years of his life. They truly made it a loving home for him. In accordance with Donald’s wishes cremation has taken place and there will be no public services held. Online condolences and special memories may be shared with the family by visiting the obituary page at www.bacarellafuneralhome.com

The family of Donald E Heiden created this Life Tributes page to make it easy to share your memories.

Send flowers to the Heiden family.