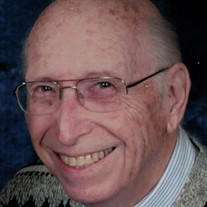 Donald Alfred Finzel, 89 years, a lifelong resident of Monroe, Michigan, went home to be with the Lord on Saturday, January 5, 2019 in his home. Born October 27, 1929 in Monroe, Don was the son of the late Alfred W. and Augusta (Krug) Finzel. He was a 1947 graduate of Monroe High School. While at Monroe High School he lettered in baseball, basketball and track. After high school he was drafted by the St. Louis Browns baseball organization, where he was catcher for their minor league team. Don married the former, Bonnadine Donnelly with whom he had five children. In November of 1985 Don married the former, Ramona L. Dwire in Monroe. Don worked at the Monroe Evening News for 43 years. He began his career as at a linotype operator and retired as an advertising sales representative in 1991. Don was a lifelong member of Holy Ghost Lutheran Church where he served as the treasurer from 2003 to 2017. An Avid Bowler, he bowled multiple 300 games. Don was the past president and financial secretary of the Greater Monroe Bowling Association. He was inducted into the Monroe Bowling Association Hall Of Fame in 1989. Although he bowled at many different alleys, Nortel Lanes was the place he called home. He enjoyed playing golf, and camping and traveling with his family throughout the United States and Canada. Don Leaves to cherish his memory his beloved wife of 33 years, Ramona, five loving children; Rodney (Kathleen) Finzel of Long Island, New York, Laurie (Robert) Berry of Monroe, Barry (Muriel) Finzel of Minneapolis, MN, Bret (Susan) Finzel of Alpena, MI, and Bart (Sally) Finzel of Morris, Minnesota, two step children; Teresa (Charles) Asbury of Monroe and Michael (Jennifer) Thomas of Temperance, 16 cherished grandchildren and 10 treasured great grandchildren. Visitation will be held on Thursday from 5-8 PM in the Bacarella Funeral Home, 1201 S. Telegraph Rd., Monroe, MI, 48161. On Friday, January 11, 2019 he will lie in state at Holy Ghost Lutheran Church from 10:00 AM until funeral services celebrating his life at 11:00 AM. The Rev. Lee Cullen, pastor of the church, will officiate. Interment will follow at Gethsemane Cemetery. Memorial contributions are suggested to Holy Ghost Lutheran Church. Online condolences, and special memories, may be shared with the family by visiting the obituary page at www.bacarellafuneralhome.com.

Donald Alfred Finzel, 89 years, a lifelong resident of Monroe, Michigan, went home to be with the Lord on Saturday, January 5, 2019 in his home. Born October 27, 1929 in Monroe, Don was the son of the late Alfred W. and Augusta (Krug) Finzel.... View Obituary & Service Information

The family of Donald A. Finzel created this Life Tributes page to make it easy to share your memories.

Send flowers to the Finzel family.