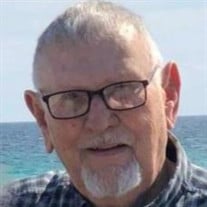 Donald Joel Bateman, 85, a resident of Monroe since 1979, passed away on November 19, 2020, at Promedica Monroe Hospital of the COVID-19 virus. Don was born on May 2, 1935, in Oklahoma City, Oklahoma to Alvin Bateman and Bertha (Hopewell) Bateman. He graduated from the Oklahoma Military Academy in Claremore, Oklahoma and he was a graduate of Oklahoma State University with a Bachelor’s Degree in Mechanical Engineering. On September 1, 1956, he and his wife, Marilyn Herbord were married in Protection, Kansas. They shared their life together for the last 64 years, raising three children, five grandchildren and four great grandchildren. After a career with several different Gas Utility companies throughout the United States and 9 years with the Michigan Public Service Commission, Don opened his own very successful business, Donald J. Bateman and Associates, specializing in Utility Regulatory Consulting. He operated this business until his retirement in 1997. Don and Marilyn spent many years in their second home Destin, Florida. They enjoyed very good years and memories, with many friends at the Monroe Golf and Country Club and at the Sandestin Golf Resort. Don was a member of the Monroe Christian Church, Campaign Manager of the United Way of Monroe County in the 1980’s and he was on the board of directors for ARC of Monroe County. Don is survived by his wife, Marliyn; his three children: Joelee Ann Bateman, Jayna Linn (Tim) Goins, and Donald Joel Bateman II; his five grandchildren: Joshua Lee (Rebecca) Goins, Nathan Raymond (Leah) Goins, Jacob Joel (Kelly) Goins, Austin Joel Bateman, and Casey Marie Bateman; four great grandchildren: Natalie, Halle, Leanne and Cooper. He is also survived by his sister, Eva McKinley of Oklahoma City and many nieces and nephews. In addition to his parents, Don was preceded in death by his brother Alvin Bateman. No services are currently planned, due to the COVID-19 virus restrictions. Bacarella Funeral Home, 1201 S. Telegraph Road, Monroe, MI is assisting Don’s family with funeral arrangements. Memorial contributions are suggested to The Salvation Army or Oaks of Righteousness.

Donald Joel Bateman, 85, a resident of Monroe since 1979, passed away on November 19, 2020, at Promedica Monroe Hospital of the COVID-19 virus. Don was born on May 2, 1935, in Oklahoma City, Oklahoma to Alvin Bateman and Bertha (Hopewell)... View Obituary & Service Information

The family of Donald Joel Bateman created this Life Tributes page to make it easy to share your memories.

Send flowers to the Bateman family.