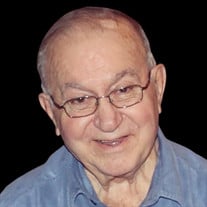 Dominic J. Charles, age 89 of Monroe, passed away at 10:16 p.m. Thursday, June 10, 2021 at ProMedica Monroe Regional Hospital. Born June 20, 1931 in Monroe, Dominic was the son of the late Frank and Antoinette (Colucci) Charles. He attended St. Joseph Parochial Grade School, Lincoln Junior High School, graduated from Monroe High School in 1949, and earned an Associate Degree from the University of Toledo. On October 9, 1954, he married Evelyn E. DeKeyser at St. Mary Catholic Church and together they raised three children. Sadly, she passed away on February 19, 2011. During the Korean War, Dominic proudly served his country in the U.S. Air Force from February 1, 1951 until being honorably discharged on October 31, 1952, obtaining the rank of Sergeant. Dominic had a long career in the paper manufacturing business. He worked for River Raisin Paper Company from 1949 – 1964 and Union Camp Corp. from 1964 until retiring in 1984. Afterward, as self-employed, he continued to work part-time in paper sales until the age of 76. Dominic was a longtime baseball coach. From Little League to Men’s baseball, he won numerous titles throughout his coaching career and was inducted into the Monroe Sports Hall of Fame. Aside from athletics, Dominic was very active in the Monroe community. He was a member of the Monroe County Mental Health Association, Monroe County Community Credit Union, Big Brothers, St. Mary Catholic Church, Monroe Council 1266 Knights of Columbus, and the American Legion. Dominic is survived by his three children, Dr. Dominic (Sharon) Charles of Monroe, Michael (Cheryl) Charles of Farmington Hills, and Wendy (Eamon) Murtagh of Livonia; five grandchildren: Amber (Tim) Pierce, Lindsay Charles, Alex (Karley) Charles, Rachel (Brandon) Wilt, and Colin Murtagh; three great-grandchildren, Annabelle, Lainey, and Reagan, and two more on the way. In addition to his parents and wife, Dominic was preceded in death by two brothers, John and Joseph Charles. Family and friends may visit from 2 p.m. to 8 p.m. Thursday at Bacarella Funeral Home. At 7 p.m., his family will eulogize and share memories of their father. Dominic will lie in state at 10 a.m. Friday at St. Mary Catholic Church where Mass of the Resurrection will be celebrated at 11 a.m. by family friend, Rev. Fr. Scott Thibodeau, Pastor of Our Lady of Lakes Catholic Church in Waterford, who will officiate. Burial will follow at St. Joseph Cemetery. For anyone wishing to make a memorial donation, the family suggests supporting Paula’s House in Monroe by visiting their website https://paulashouse.squarespace.com/

The family of Dominic J. Charles created this Life Tributes page to make it easy to share your memories.

Send flowers to the Charles family.