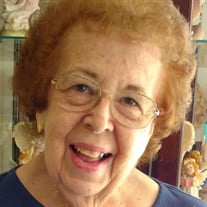 Dolores E. O’Brien, 83 years, of Monroe, Michigan, went home to be with the Lord on Thursday, December 19, 2019 at Hospice of Northwest Ohio in Toledo, Ohio. Born September 11, 1936 in Monroe, Dolores was the daughter of the late Camilus and Eleanor (Lorenz) Manor. She was baptized and confirmed at St. Charles Borromeo Catholic Church in Newport, MI, where she attended elementary school. Dolores was a 1954 graduate of St. Mary’s Academy. On August 6, 1960 Dolores married her beloved husband, Dennis O’Brien at St. Charles Borromeo Catholic Church, Fr. Anthony Kerry performed the ceremony. Sadly, Dennis preceded her in death on September 8, 2005 after 45 years of marriage. Dolores, in addition to being a wonderful homemaker, worked as a teller for several banks in the area, including; Security Bank & Trust, Standard Federal, and Trenton State Bank. A devout Catholic, Dolores was a member of St. Mary Catholic Church but also attended Mass at St. John’s and St. Charles. She enjoyed traveling and bowling and was a former member of both the Monroe and Grosse Ile Golf & CC. Most of all Dolores loved time spent with family. Dolores is survived by seven loving children; Collette M. Gessner, Colleen M. (Berdine) Roberts, Aaron K. (Laura) O’Brien, Yvonne L. O’Brien, Devin A. (Janice) O’Brien, Shawn D. O’Brien and Sheila M. (Shaun) McGowan, twelve cherished grandchildren; Corrine, Ryan, Kyle, Kelsey, and Kegan O’Brien, Carolyn, Austin, and Shane Gessner, Veronica and Gabriel McGowan, Andrew O’Brien and Robert O.B. Webb and a brother; Edward Manor. In addition to her beloved husband and parents, Dolores was preceded in death by a son in law; James Gessner, a daughter in law; Sue O’Brien and four siblings; Marian Reaume, Joyce Mulcahy, and Roy and Floyd Manor. Visitation will be held on Sunday from 12 – 7 pm in the Bacarella Funeral Home, 1201 S. Telegraph Rd., Monroe, MI 48161, where a Rosary Service will be held that evening at 6:00 pm. On Monday, December 23, 2019 prayers will begin at the funeral home at 9:15 am, a procession will follow to St. Mary’s Catholic Church where Mass of the Resurrection will begin at 10:00 am. Fr. Brian Chabala, will be the celebrant. Entombment will follow at St. Joseph Cemetery in Monroe. Memorial contributions are suggested to the Alzheimer’s Association or Hospice of Northwest, Ohio. The family would like to thank West Park Place and Senior Care Management and Hospice of Northwest Ohio for their kindest and care.

Dolores E. O&#8217;Brien, 83 years, of Monroe, Michigan, went home to be with the Lord on Thursday, December 19, 2019 at Hospice of Northwest Ohio in Toledo, Ohio. Born September 11, 1936 in Monroe, Dolores was the daughter of the late... View Obituary & Service Information

The family of Dolores E. O'Brien created this Life Tributes page to make it easy to share your memories.

Send flowers to the O'Brien family.