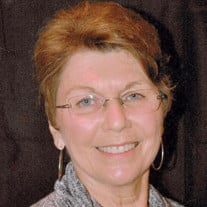 Diane (Mulpas) Loughridge,74, of Monroe, Michigan transitioned to the next phase of her journey on October 17, 2019. She was preceded in death by her mother and father Vera and Lawrence Mulpas and daughter, Wendy Kay Loughridge. She is survived by her daughter, Julie Ulibarri (Jeanine), sister, Janice Vitale (Tony), brother, Larry Mulpas (Kathy), grandchildren, Adam and Ashley Ulibarri, and numerous nieces and nephews. Born March 13, 1945 and raised in Monroe. She graduated from Monroe High School in 1963. She married Michael Loughridge that same year. After moving around early in their marriage they settled in Carrollton, Texas (a suburb of Dallas). In 2003 Diane and Mike divorced and she moved to St. Petersburg, Florida to be close to Julie and the grandkids. In 2009, Diane came full circle and moved back to her hometown, Monroe, to be close to her extended family. She worked for Safeway food stores for many years and owned her own cleaning business. Her attention to detail and trustworthiness lead to several long time clients who also became her friends. While living in Wilson, North Carolina in the late 1960’s Diane was honored as Woman of the Year by the Junior Chamber of Commerce for her work in educating the public about Cystic Fibrosis, the lung disease that daughter, Wendy, was born with in 1967. After Wendy’s passing at Children’s Medical Center Dallas in 1977, Diane continued to honor Wendy’s memory on her birthday with homemade gifts and a GIANT birthday cake for the children staying at the hospital. She also donated money and toys to the hospital’s children’s playroom where Wendy spent way too many days. Diane had many talents and interests. She created beautiful ceramic pieces. Her friends and family will treasure and enjoy the multitude of pieces she created and gifted for each major holiday and season. Born and raised in a hunting family Diane continued this interest into adulthood. She and Mike hunted for many years while living in Texas. In 1985, being the only woman in the deer camp, Diane shot a trophy 10 point buck on opening weekend. She field dressed it on her own thus earning the respect of her fellow hunters and title of “Queen” of the camp. Diane had a great love of people and she demonstrated this in many ways. She and Mike entertained often at their home in Carrollton. There were pool parties, chili cook offs, July 4 parties, Christmas Eve gatherings, holiday open houses, and so much more. Diane planned, shopped, decorated and cooked enthusiastically for these memory making events. Hands down her BBQ brisket, baked beans, potato salad, sausage balls, cheesecake and carrot cake were crowd favorites remembered fondly and recipes remain in circulation. Diane’s love of family and family history turned into a photography hobby. At every celebration and gathering Diane was there with her camera. This was long before the digital age, and those 1000’s of photographs have been preserved in dozens of photo albums in which she carefully captioned each with words typed on a typewriter, then cut and pasted in the album. Diane maintained friendships for decades with people she met in every state she lived in. Her address book is a testimony to her drive to “keep in touch”. Her annual Christmas card/letter list was in the 100’s and she absolutely loved getting family pictures and updates from all who reciprocated. She saved them all!! Visitation will be held on Saturday, October 26, 2019 in the Bacarella Funeral Home, 1201 S. Telegraph Rd., Monroe, Michigan, 48161 from 10:00 am until funeral services celebrating her life at 12:00 noon. Interment will be at Roselawn Memorial Park, LaSalle. She will be buried next to Wendy Kay. Memorials may be made to the Cystic Fibrosis Foundation (cff.org).

Diane (Mulpas) Loughridge,74, of Monroe, Michigan transitioned to the next phase of her journey on October 17, 2019. She was preceded in death by her mother and father Vera and Lawrence Mulpas and daughter, Wendy Kay Loughridge. She is... View Obituary & Service Information

The family of Diane Loughridge created this Life Tributes page to make it easy to share your memories.

Send flowers to the Loughridge family.