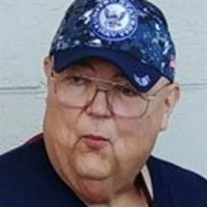 Dennis E. Ayers, age 66 of Monroe, passed away Monday evening, August 31, 2020. He was pronounced at 8:02 p.m. by rescue response personnel after being found unconscious outside his apartment. He had been in declining health the past four years. Born May 21, 1954 in Monroe, Dennis was the son of Curtis and Nellie (Bowlin) Ayers. He graduated from Monroe High School in 1973 and enlisted in the U.S. Navy in 1974, proudly serving until being honorably discharged in 1978. On December 23, 1974, Dennis married Kathy J. Poore at Calvary Baptist Church in Monroe. Employed by General Motors for 30 years, he worked at the Willow Run Plant in Ypsilanti and the Flint Metal Fabrication Plant while residing in Flint, Michigan. Dennis is a member of the American Legion and a past member of the former Monroe Apostolic Church. He is also a member of the First Apostolic Church of Mount Morris. Dennis had a kind heart and always put others needs before his own. He loved singing, playing his guitar and karaoke. His hobbies included fishing, reading, spending time with his family and quiet time with The Lord. Dennis is survived by his wife Kathy; father, Curtis Ayers of Sebring, FL; brother, Michael (Denise) Ayers of Monroe; sisters, Virginia (David) Adkins of Monroe and Deborah (John) Fuson of Canyon City, CO; half-brother, Gene Ayers of Bradenton, FL; step-brothers, Jeff (Karen) Fleeman of Worthington, OH and Jim (Julie) Fleeman of Macedonia, IL; step-sisters,Linda (David) Fultz and Sandy Staton, both of Delphi, IN; brothers-in-law, David Miller of Monroe and Dean Poore of Toledo, OH; sister-in-law, Alene Poore of Swartz Creek, MI; and several beloved nieces and nephews. Dennis was preceded in death by his mother, Nellie Ayers; sister, Judy Miller; and half-brother, Randall Ayers. Family and friends may visit from 2 p.m. to 8 p.m. Friday at Bacarella Funeral Home where services will be held at 11 a.m. Saturday. Rev. Joshua Arrand, pastor of More Life Tabernacle in Swartz Creek will officiate. Burial will follow at Roselawn Memorial Park with military honors provided by VFW Post 1138, Monroe. All visitors are asked to follow facial covering protocols. For anyone wanting to make a memorial donation, the family suggests supporting a American Legion Post of the donor’s choice.

Dennis E. Ayers, age 66 of Monroe, passed away Monday evening, August 31, 2020. He was pronounced at 8:02 p.m. by rescue response personnel after being found unconscious outside his apartment. He had been in declining health the past four... View Obituary & Service Information

The family of Dennis E. Ayers created this Life Tributes page to make it easy to share your memories.

Send flowers to the Ayers family.