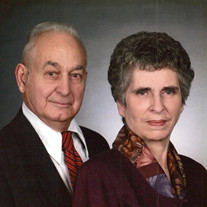 Delfino (Del) Bruno Serra, age 93, passed from this earth to his heavenly home while surrounded by his children on Monday, January 31, 2022 at ProMedica Monroe Regional Hospital. Del was born in New Britain, CT. April 20, 1928, the fourth child of Giovanni Antonio and Angelina (Gambogi) Serra. He had four half -siblings and grew up in a large Italian immigrant family. He loved his country. At the age of 17 he dropped out of Bristol Tech High School and joined the navy in late 1945. After four years of service he used the GI bill to attend Michigan State College (renamed Michigan State University in 1955). His studies were interrupted when he was called back for two years of service in the naval reserve during the Korean War. He finished his degree in business administration at MSU upon his return. Del began his career at Sears in Monroe, MI. While there he met the love of his life, Margaret Ann Russeau. They married on October 19, 1957 and built a home together raising seven children in LaSalle, MI. They were married for 61 years. Del was a long-time member of St. Joseph Catholic Church in Erie, MI. He served as a reader and was a member of the Knights of Columbus where he served as Grand Knight. He will be fondly remembered by those who loved him for his sense of humor and his stories from his childhood, his service in the navy, and his 37 years working at Sears. For many years he grew a large garden that he liked to walk through every night after work. He also liked to grow flowers around the house. He was especially pleased with a rose brush in front of the house that grew so tall you could see roses through the kitchen window. He enjoyed reading and was especially interested in history. Playing cards with family and friends was a favorite way to socialize. He kept up with current events so he could remain engaged with the world. He will be sadly missed and fondly remembered by his children: John of LaSalle, MI, Cynthia Wagner of LaSalle, MI, David of Monroe, MI, Michael (Christina) of Boardman, OH, Sandra (Scott) Perkins of Erie, MI, James of Monroe, MI, and Gregory (Anna) of Monroe, MI as well as his grandchildren Kierra (Chris), Kendra, Kasey, Rachel (Corey), Chelsea, Lucas, Christopher, Noah, and Maria. Del was preceded in death by his parents, his seven siblings, and his loving wife, Margaret, who passed away on January 17, 2019. Family and friends may visit from 2 p.m. to 8 p.m. Sunday, Feb. 6th at Bacarella Funeral Home. The Rosary will be recited at 7 p.m. by Erie Council 7413 Knights of Columbus. Del will lie in state at 10 a.m. Monday at St. Joseph Catholic Church in Erie, MI. Mass of Christian Burial will be celebrated at 11 a.m. by Del’s nephew, Rev. Fr. Kevin Russeau, CSC, followed by burial at St. Joseph Cemetery, Erie, with military honors provided by Erie VFW Post 3925. A luncheon with continued time of fellowship will follow in the church hall after the graveside service. In lieu of flowers, the family suggests supporting Heartbeat of Monroe or the American Lung Association. Online condolences and special memories may be shared with the family by visiting the obituary page at www.bacarellafuneralhome.com.

Delfino (Del) Bruno Serra, age 93, passed from this earth to his heavenly home while surrounded by his children on Monday, January 31, 2022 at ProMedica Monroe Regional Hospital. Del was born in New Britain, CT. April 20, 1928, the fourth... View Obituary & Service Information

Send flowers to the Serra family.