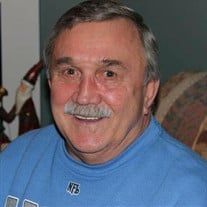 Danny Knezevich, 73 years, of Monroe, Michigan, went home to be with the Lord on Sunday, November 10, 2019 in his home. Born December 15, 1945 in Detroit, Michigan, Danny was the son of the late Bosko and Betty (Zelei) Knezevich. He attended Jefferson High School. Danny was employed as a Crane Operator at North Star Steel in Monroe from which he retired in 2001. Danny was a former member of the Loyal Order of Moose Lodge #884 and enjoyed playing the guitar, golfing, boating, and fishing. Danny was also a football fan; he especially liked the Detroit Lions and attended many of their games with his buddies. Most of all Danny enjoyed time spent with family, especially his grandchildren; where he could be found in the stands, always being the “Supportive Papa” at their sporting events. He will be fondly remembered as a kind and great man with a big heart and a contagious smile. Danny is survived by five loving children; Dan Frank (Amanda) Knezevich of Cleveland, TN, Dennis A. (Karen) Knezevich of Monroe, Derek W. (Maria) Knezevich of Milford, MI, April D. (Johnson) Rochowiak and Trena M. (Johnson) Kaminski both of Monroe, 18 cherished grandchildren, 15 treasured great grandchildren and four siblings; Nick (Charlotte) Knezevich, Marianne (Danny) Williams, Jimmy (Cathy) Knezevich and Mark (Jan) Knezevich all of Monroe. In addition to his parents; Danny was preceded in death by two brothers; Milivoy and Bosko and a sister; Sophie Geyman. In keeping with Danny’s wishes cremation will be held. On Saturday, November 16, 2019 friends and family are invited to celebrate his life at the Monroe Boat Club from 2-6 PM. During that celebration family and friends will be sharing special stories and memories at 3:00 PM. Memorial contributions are suggested to American Diabetes Association. www.diabetes.org.

Danny Knezevich, 73 years, of Monroe, Michigan, went home to be with the Lord on Sunday, November 10, 2019 in his home. Born December 15, 1945 in Detroit, Michigan, Danny was the son of the late Bosko and Betty (Zelei) Knezevich. He attended... View Obituary & Service Information

The family of Danny Knezevich created this Life Tributes page to make it easy to share your memories.

Send flowers to the Knezevich family.