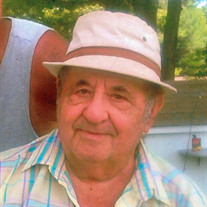 Daniel Pavlovich, 88 years, of Monroe, Michigan, went home to be with the Lord on Thursday, September 10, 2020 at Beaumont Hospital in Dearborn, Michigan. Born August 15, 1932 in Monroe, Dan was the son of the late Mirko “Mike” and Draginja “Dorothy” (Borovich) Pavlovich. He was a 1950 graduate of Monroe High School. Dan served his country honorably and proudly as a Sergeant in the United States Marine Corps. Dan served from September 1952 to September 1955. On February 8, 1958 Dan married his beloved wife Marie E. Bates, in Monroe at Trinity Lutheran Church. Sadly, she preceded him in death on May 29, 1994 after 36 years of marriage. Dan worked as a lineman for over 30 years at Michigan Bell and AT&T. After retirement he started his own business, Dan’s Saw Sharpening. Dan was a member of the American Legion, Fraternal Order of Eagles, the National Rifle Association, and St. George Serbian Orthodox Church, which he helped construct. Dan was an avid sportsman and enjoyed spending time at his cabin in Curtisville. He had a special talent for sharp shooting and won many awards in Michigan, almost making it to the Olympics. He loved to fish. hunt, and garden. Dan raised and trained Beagles for hunting. He also raised livestock, as well as pheasants, geese, ducks, and chickens. Any time you needed a handy man you could call Dan, he loved building and repairing things. He was truly a jack of all trades. Most of all Dan enjoyed time spent with family. Dan is survived by his four loving children: Jean (Richard) Wyatt of Carleton, Dorothy Brazill of Clyde, Nancy (Douglas) Eighmey of Newport, and Mary (Michael) Berger of Monroe, a sister; Millie Elmer of Monroe, 10 cherished grandchildren, 18 treasured great grandchildren, and three step sons; Arthur Hutting of Grand Rapids, Francis (Barb) Hutting and Jerry (Katie) Cobb both of Monroe. In addition to his parents and wife Marie, Dan is preceded in death by twin sons; Joseph and John, a brother; Mike and a sister; Anna. Visitation will be held on Tuesday from 4-8 pm at Bacarella Funeral Home, 1201 South Telegraph Rd., Monroe, MI 48161. On Wednesday, September 16, 2020, he will lie in state at St. George Serbian Orthodox Church, from 10:00 am until services celebrating his life at 11:00 am. Interment will follow at Roselawn Memorial Park, where the VFW Post 1138 will conduct military honors. Memorial contributions in Dan’s memory are suggested to St. Jude Children’s Hospital or St. George Serbian Orthodox Church. Please follow all CDC guidelines, which include social distancing and face coverings.

The family of Daniel Pavlovich created this Life Tributes page to make it easy to share your memories.

Send flowers to the Pavlovich family.