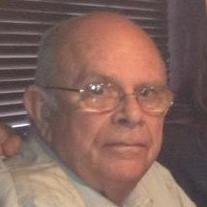 Daniel Harold Maurice, 80, of Temperance, Michigan, passed away peacefully in his home on Friday October 25, 2019. He was under the care of Promedica Hospice, Sylvania, OH. Danny was born January 30, 1939 in Monroe, Michigan. He was the son of the late Harold and Katherine (Ready) Maurice. In 1962, he married the love of his life, Joanne Simpson at St. Michaels Church. Danny graduated in 1957 from Monroe Catholic Central High School. He worked for the Monroe County Sheriff’s Department for 15 years. He worked in several capacities while on the force, which included the K9 unit with his partner Mike, marine unit, and the dive team. He earned Deputy of the year in 1967. Danny left the force with the rank of Sergeant. He then worked at North Star Steel as a Crane Operator, retiring in 1999. Upon retirement they spent their winters in Cape Coral, Florida. Danny enjoyed time spent with family, especially when they visited him at his favorite place, otherwise known to the great grand kids as “Pa’s Lake House” He enjoyed his summers living at the lake, playing with the grandkids, then the great grand kids. They lit up his eyes and always brought a smile to his face. He enjoyed riding his Harley, watching NASCAR and Barrett-Jackson Car Auctions, watching and feeding the birds, and deer hunting with his buddies for many years. Danny will be greatly missed by his family and friends. He was a soft spoken, respected man who always knew exactly what to say. He was a man who knew just about everything. Danny is survived by his loving wife of 57 years; his children, Scott (Didem) Maurice of Potomac Falls, VA, Bryan (Kay) Maurice of Toledo, OH, Karin Maurice and Craig Maurice, both of Monroe, MI, his grandchildren, Stephanie Maurice, Danielle (David) Pursley both of Monroe, MI, Pinar Maurice of Seattle, WA, and Aleah Maurice also of Monroe. He was also blessed with six great-grandchildren, Julia, Jaxon, Maxwell, McKenna, Gage and Adalynn, as well as his brother Patrick (JoAnn Huff) Maurice of Ft Myers, Florida. In addition to his parents, Danny was preceded in death by a son, Brett Maurice; grandson, Thomas Brooks II; and his siblings William (Bill) Maurice and Mary Kay Dobbs. In accordance with Danny’s wishes, cremation has taken place. The family will receive visitors from 3 p.m. to 7 p.m. Saturday at Bacarella Funeral Home where a memorial service will be held at 7 p.m. Deacon Mike Stewart of St. Mary Catholic Church will officiate.

Daniel Harold Maurice, 80, of Temperance, Michigan, passed away peacefully in his home on Friday October 25, 2019. He was under the care of Promedica Hospice, Sylvania, OH. Danny was born January 30, 1939 in Monroe, Michigan. He was the... View Obituary & Service Information

The family of Daniel Harold Maurice created this Life Tributes page to make it easy to share your memories.

Send flowers to the Maurice family.