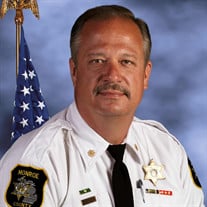 Dale A. Malone, age 62 of Carleton, MI, passed away Wednesday, January 26, 2022 in his home under the care of Heart to Heart Hospice. Born March 11, 1959 in Dearborn, MI, Dale was the son of Robert and Marion (Moore) Malone. A 1977 graduate of Airport High School, Dale married his high school sweetheart, Deborah S. Fountain on January 26, 1980 at St. John Lutheran Church in Waltz. A stand-out football player in high school, Dale was awarded a scholarship to attend Eastern Michigan University where he played as a running back until reinjuring his knee. Dale had a long and full career with the Monroe County Sheriff’s Department. Beginning in 1981, Dale held the positions of Deputy, Sergeant, Lieutenant, Major, and County Sheriff from 2013 until his retirement in 2020. Dale was a member of the Robert A. Hutchinson Fraternal Order of Police Lodge 113. He was an avid football fan and golfer. His other interests included deer hunting, 4-wheeling and fishing in their pond with his grandchildren, and spending time with his family and friends, especially when cooking and grilling was involved. Dale is survived by his wife of 42 years, Debbie Malone; his mother, Marion Malone of Carleton; two daughters, Melissa (Frank) Stasa, IV of Wyandotte, MI and Molly (Zachery) Briscoe, stationed in Stuttgart, Germany; three brothers, Robert (Renee) Malone of Brighton, MI, Walter (Karen) Malone of Wichita, KS, and James (Kelly) Malone of Harbor Springs, MI; five grandchildren, Jackson Eikenberry, Peyton Briscoe, Frank Stasa, V, Dierks Briscoe, and Amelia Briscoe. Dale was preceded in death by his father and an infant grandson, Dylan Eikenberry. No services will be planned in accordance with Dale’s wishes. Bacarella Funeral Home is assisting the family with final disposition directives. For anyone wanting to make a donation in memory of Dale, his family suggests supporting Ronald McDonald House of Toledo, 3883 Monroe St., Toledo, OH 43606. Online condolences and special memories may be shared with the family by visiting the obituary page at www.bacarellafuneralhome.com.

Dale A. Malone, age 62 of Carleton, MI, passed away Wednesday, January 26, 2022 in his home under the care of Heart to Heart Hospice. Born March 11, 1959 in Dearborn, MI, Dale was the son of Robert and Marion (Moore) Malone. A... View Obituary & Service Information

The family of Dale A. Malone created this Life Tributes page to make it easy to share your memories.

Send flowers to the Malone family.