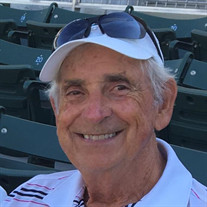 Clifford Wayne Asher, age 80, of Monroe, passed away on his 80th birthday, Dec. 5, 2019. Wayne attended Monroe High School and was offered a scholarship for both swimming and tennis to BGSU, but chose to attend Michigan State University and was a walk-on to the Men’s Tennis Team, playing #1 singles his freshman year. He married Wilma (Bootsie) Shopshire in 1963 and worked his way through college by working at the railroad. After graduating from MSU with a degree in Biological Sciences, Wayne went on to work as an Environmental Engineer for Ford Motor Co. until his retirement. After retirement, his ambition was to develop the sport of tennis in Monroe. He started a program at Monroe Golf and Country Club, operating the Asher School of Tennis for 15 years. He was also an instructor and teaching pro at the Monroe YMCA for 15 years. Wayne was responsible for establishing USTA Junior Team Tennis in Monroe and started the first Community Tennis Association for Monroe county. From 2007 – 2015, he coached the SMCC boys tennis team which ultimately qualified for the State Championship Tournament. From 2008 – 2019, he coached the SMCC girls tennis team which qualified for the State Championships 9 times during this 12 year period. Twenty-two of his girls have received All-State status or All-State Honorable mention. Wayne has received numerous recognitions including two-time Huron League Coach of the Year; three-time Monroe County Tennis Coach of the Year; three-time Regional Coach of the Year; State Coach of the Year 2018; and was most recently nominated to the Michigan High School Tennis Coaches Association Hall of Fame. Coach Asher was proud of all the tennis students he instructed. In recent years, Wayne developed a passion for another sport – pickleball. He was an avid pickleball player and played regularly with his wife, children, and friends. Another sport he excelled in for years was swimming. In 2013, Wayne competed in the World Triathlon Championships in New Zealand & at the age of 64, placed 2nd in his age group in the aquathlon and 34th in the Triathlon. He also enjoyed golfing and watching MSU football and basketball. In addition to sports, he enjoyed reading, writing, binary puzzles, hunting, fishing, and gardening. The development of Asher Fox Farm was another of his enterprises. He was a former member of the Board of Directors for the Salvation Army, Ann Arbor Triathlon Club, Monroe Biking Club, and Indiana Fox Breeders Association. Wayne was the cornerstone of his family and was deeply loved and respected by them. He and his wife, Bootsie, celebrated 54 years of marriage on Sept. 14. They enjoyed playing pickleball, cards, and board games together. They have 4 children and 11 grandchildren: Daughter, Rebecca (David) Gutschow and grandchildren Taylor, Parker, & Haley (Josh); Son, Bradley (Lori) Asher and grandchildren Logan, Cole, & Alexa; Daughter, Stephanie Dabbs, and grandchildren Israel & Macy; son, Jeremiah (Abigail) Asher and grandchildren Gabrielle, Jackson, & Liam. Wayne passionately supported his children in sports, arts, & education and enjoyed coaching them in sports and in life. Family & friends are invited for visitation at Bacarella Funeral Home, 1201 South Telegraph Rd, Monroe, MI, from 2:00 to 8:00 on Tuesday, Dec. 10. A funeral service will be held at Stewart Rd. Church of God, 1199 Stewart Rd, Monroe, MI, on Wednesday, Dec. 11. He will lie in state at 10:00 and the service will begin at 11:00. To leave an online condolence, visit www.bacarellafuneralhome.com Memorials may be made to the Salvation Army.

Clifford Wayne Asher, age 80, of Monroe, passed away on his 80th birthday, Dec. 5, 2019. Wayne attended Monroe High School and was offered a scholarship for both swimming and tennis to BGSU, but chose to attend Michigan State University and... View Obituary & Service Information

The family of Clifford Wayne Asher created this Life Tributes page to make it easy to share your memories.

Send flowers to the Asher family.