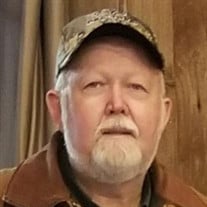 Cletis M. Brooks, age 72, of Monroe, went home to be with the Lord at 10:14 a.m. Friday, September 4, 2020, at St. Joseph Mercy Hospital, Ann Arbor. Born August 1, 1948 in Middlesboro, Kentucky, he was the son of the late William Bradley and Edith (Gilbert) Brooks. Cletis attended Forge Ridge High School in Harrogate, Tennessee, graduating with the class of 1966. Shortly after graduating from high school, Cletis moved to Monroe, where he met his beloved wife, Mary Helen Smith. The two would later marry on September 22, 1967 at Hope Church. Cletis worked for Ford motor Company at the Woodhaven Stamping Plant as a Die Setter for thirty-four years, retiring in August of 2000. He was a proud member of UAW Local 387 and life-member of the NRA. Cletis was a member of the Freemasons where he attained 3rd Degree. He was a charter member and Deacon of Liberty Missionary Baptist Church and prior member and Deacon of Union Street Missionary Baptist Church. Cletis was an avid outdoors man. Whether it was at his first cabin in Gladwin or current cabin in Reed City, he cherished time spent with his family “up north” deer hunting, fishing, and riding four wheelers and snowmobiles. Having grown up on a farm in Tennessee, Cletis enjoyed working in his garden and restored several John Deere Tractors. He was a “Jack-of-all-trades” and was able to fix anything. Cletis was a devout family man, who loved his family more than anything. He will be remembered as a caring papa by many. To cherish his memory, Cletis leaves his loving wife of fifty-three years, Mary Helen of Monroe; three children: Karen (John) Fisher of Monroe, Jimmy Cletis (Missy) Brooks of Columbus, Ohio, and Tommy Mitchell (Ann) Brooks of Sarasota, Florida; two siblings, Kenneth (Patsy) Brooks of LaSalle and Linda (Bill) Frazier of New Tazwell, Tennessee; six grandchildren: Andrew (Leslie) Lay, Kurtis (Star) Lay, Brittney (Paul) Baumann, Brandon Cletis Brooks, Riley Mitchell Brooks, and Noah Brooks; and four great-grandchildren: Annalyse, Lucas, Elijah, Emerick; with one more great-grandchild, Brody, on the way. In addition to his parents, he was preceded in death by one brother, Donald Brooks. Visitation will be held from 1-7 p.m. Wednesday, September 9, 2020, at Bacarella Funeral Home, 1201 S. Telegraph Road, Monroe, MI, 48161. Services celebrating his life will begin at 11 a.m. Thursday, September 10, 2020, also at Bacarella Funeral Home. Rev. Joe Bryant, Paster of Union Street Missionary Baptist Church, will officiate. Interment will follow at Roselawn Memorial Park, LaSalle. Memorial contributions in Celtis’ memory are suggested to Union Street Missionary Baptist Church, Liberty Missionary Baptist Church, or a charity of the donor’s choice. Online condolences and special memories may be shared with the family by visiting the obituary page at www.bacarellafuneralhome.com

The family of Cletis M. Brooks created this Life Tributes page to make it easy to share your memories.

Send flowers to the Brooks family.