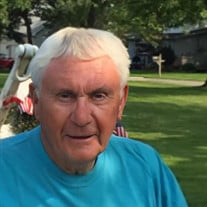 Clarence Peter “Pete” Lorentz, age 88, of Monroe, passed away Saturday, May 7, 2022 at Medilodge of Monroe surrounded by his family. Pete was born October 20, 1933 in Tiffin, Ohio, he was the son of Clarence A. and Vera (Rober) Lorentz. He married Barbara Mettler August 30, 1958 at Blessed Sacrament Church in Toledo. He served his country in the US Army from December 16, 1953 until his honorable discharge December 15, 1955. Pete graduated from Alexian Brothers Hospital School of Nursing in Chicago and went on to earn his bachelor’s degree from Siena Heights University and was a Nurse Anesthetist at Mercy Memorial Hospital for many years before his retirement in 1994. Pete was a member of St. Anne’s Church and their Men’s Club. He and his wife ran the Food Closet at St. Anne’s for 20 years. He was also a member of the Detroit Beach Boat Club. He had previously served on the board of the Stony Point Peninsula Association where they have lived for nearly 50 years. He was involved in many other organizations and clubs, but are too numerous to mention. He is survived by his wife of 63 years, Barbara Lorentz; five children, Dawn Lorentz of Adrian, Leanne (Larry) Eisinger of Toledo, Susan (Ray) Pileski of Elyria, OH, Peter Lorentz of Newport and James (Caryn) Lorentz of Newport; twelve grandchildren, Jonathon, Daniel, Jason, Ryan, Megan, Tyler, Paige, Kelsey, Madelyn, Hannah, Lauren and Christopher and six great grandchildren; sister in law, Jean Mettler, and numerous nieces and nephews. He is preceded in death by his parents and seven siblings, Lucille Wott, Ellen Oakleaf, Eileen Feasel, Ruth Lawson, Paul William Lorentz, Maryann Kahler and Margaret Weisenberger. Visitation will be held Thursday, May 12, 2022 from 2 to 8 p.m. at Bacarella Funeral Home, 1201 S. Telegraph Road, Monroe; where a the V.F.W. Post 1138 will hold military honors at 7 p.m. He will lie instate at 10 a.m. Friday at St. Anne’s Church 2420 N. Dixie Hwy., Monroe, with Mass of the Resurrection at 11 a.m. Rev. Henry Rebello, pastor of the church, will officiate. The family suggests memorial contributions be made to the Food Closet at St. Anne’s. Online condolences and special memories may be shared with the family by visiting the obituary page at www.bacarellafuneralhome.com.

The family of Clarence Peter "Pete" Lorentz created this Life Tributes page to make it easy to share your memories.

Send flowers to the Lorentz family.