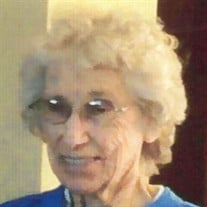 Charlotte A. Peters, age 97 of Monroe, passed away at 5:27 p.m. Friday, September 20, 2019 at Wellspring Lutheran Home. Born December 5, 1921 in Toledo, Ohio, Charlotte was the daughter of the late Ernest and Cecilia (Manders) Hertzsch. She graduated from Woodward High School in Toledo and married Carl J. Peters on April 17, 1948 at St. Mary Catholic Church in Monroe. Together they raised two children, Ruth and Joseph. Early in life, Charlotte worked at the former Steel Castings Company in Monroe until shortly after her marriage . Later, after raising her children, she was employed at Monroe Auto Equipment for approximately 25 years before retiring. Charlotte was a member of St. John the Baptist Catholic Church and a former member of its Altar Society. One of her favorite hobbies was fishing, along with gardening, knitting, sewing, crafts and ceramics. Charlotte is survived by her son, Joseph (Mary) Peters of Monroe; six grandchildren: Martha (Jeff) Proteau of Newport, David (Lynn) Joblinski of Rincon, GA, Rebecca (Charles) Mansfield of Monroe, Katrina Peters of Monroe, Jeremy (Vanessa) Peters of Monroe, and Brian (Kristine) Bacon of Ida; and ten great-grandchildren. In addition to her parents, Charlotte was also preceded in death by her husband Carl on January 22, 2005; daughter, Ruth Bacon; sister, Rose Frank; and three brothers, Carl “Skip”, Albert “Rex”, and Arthur Hertzsch. Family and friends may visit from 4 p.m. to 8 p.m. Tuesday at Bacarella Funeral Home. Charlotte will lie in state at 9:30 a.m. Wednesday at St. John Catholic Church. Mass of the Resurrection will be celebrated by Fr. Brian Chabala at 10:30 a.m. followed by interment at St. Joseph Cemetery. For anyone wanting to make a donation in Charlotte’s memory, memorials are suggested to the American Cancer Society.

The family of Charlotte A. Peters created this Life Tributes page to make it easy to share your memories.

Send flowers to the Peters family.