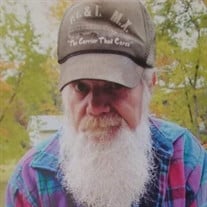 Charles L. “Rabbit” Wilkison, Jr., age 77 of Monroe, passed away Wednesday, July 14th in Toledo, Ohio. Born December 28, 1943 in Wyandotte, MI, Charles was the son of the late Charles and Lillian (Gorsline) Wilkison, Sr. Early in his life, Charles was employed by Ford Motor Company for 15 years before starting his own business, Stones & Stuff. To him, it was more of a hobby than work. He also had owned two trucking companies Silver Wolf and currently CW Truckage. Charles truly loved the outdoors, and his most treasured times were spent while living in the Upper Peninsula of Michigan. He enjoyed hunting, fishing, trapping, boating, and was an avid prospector and miner. He was a survivalist who lived off the land and provided for himself and the animals that he shared the land with. A lifelong motorcycle enthusiast and motorcycle club member, he also enjoyed attending blue grass festivals. He served in the Coast Guard, before it became a military entity, and obtained his private Maritime Captain license and SCUBA certificate. Charles was a member of the Gemological Institute of America, Gem & Lapidary Wholesalers, and the Fraternal Order of Eagles in Monroe and Ontonagon, Michigan. He will be remembered as a man of many talents, a jack of all trades, but a master of none. Charles is survived by a daughter, Carrie Wilkison of Monroe; a sister, Donna (Melvin) Hoffer of Monroe; 7 grandchildren: Tia (Doug) Thompson, Russell “Trey” (Bree) Brancheau, Noah Brancheau, Avery Brancheau, Gaige McMillian, Clifton “C.J.” (Scott) Johnson, and Mariah Kisielewski; and 2 great-grandchildren. In addition to his parents, Charles was preceded in death by a daughter, Doreen Kisielewski. Cremation arrangements were provided by Bacarella Funeral Home. A memorial time of visitation will be from 1 p.m. to 3 p.m. Thursday, July 29th at the funeral home with a memorial celebration beginning at 3 p.m. Online condolences and special memories may be shared with the family by visiting the obituary page at www.bacarellafuneralhome.com.

The family of Charles L. Wilkison Jr. created this Life Tributes page to make it easy to share your memories.

Send flowers to the Wilkison family.