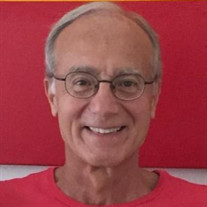 Charles A. Pollzzie of Orlando, FL passed away September 1, 2021. Born November 11, 1947 in Monroe, Mich., Charles was the son of the late Ben Pollzzie and Josephine (Bacarella) Pollzzie. He married Pamela Jean Pascoe in Plymouth, Mich., on July 17, 1970. Charles was a trailblazing oldest child. He was the first of six Pollzzie children to get a college degree, setting the precedent for the rest of his siblings. He earned bachelors & masters degrees in Speech Communication from Eastern Michigan University. While at Eastern he was a teaching fellow in the Speech & Drama Department & a student advisor in the Student Housing Department. In the U.S. Army National Guard, he was a trainee platoon leader & was named "Trainee of the Cycle". It was at Eastern Michigan University where Charles met the love of his life, Pam. His adoration for his wife of 45 years was apparent to all those who knew him. Charles began his successful 50 year career with State Farm Insurance in 1971. He worked 20 years in State Farm's corporate offices in Indiana, Illinois, Pennsylvania, Maryland & New Jersey & then spent 30 years running thriving agencies in Northern New Jersey & Central Florida. Charles had a passion for education, and taught night classes at Hood College in Frederick, MD. He was devoted to his family, spending countless hours with his sons on the interests that were most important to them. Those who knew Charles respected and appreciated him for his generosity and willingness to listen. His life advice was well sought after by loved ones, as it was always delivered not only with wisdom and compassion, but also a dash of wit and humor. He liked to remind those around him that life is not about finding yourself, it's about creating yourself. While living in Orlando, FL, he spent many hours assisting at Mary Queen of the Universe Shrine. He was a voracious reader, loved listening to classical music & collected modern art. Charles is survived by his two sons, Chris (wife Rose) of Celebration, FL and Brian (fiancé Carolina) of San Francisco, Calif.; brothers Anthony (wife Theresa), of Monroe, Ben (wife Yvonne) of Ann Arbor, and Joe (wife Renae) of Indianapolis; sisters Nina Gaynier (husband John) and Margaret Beste (husband David) of Carleton; and two cherished grandchildren, Addyson Rose, 13, and Ryan Joseph, 11, the children of Chris and Rose. He was preceded in death by his wife, Pam, and parents. A private family Mass of the Resurrection was celebrated in Monroe, and he was interred at St. Joseph Cemetery, also in Monroe.

The family of Charles A. Pollzzie created this Life Tributes page to make it easy to share your memories.

Send flowers to the Pollzzie family.