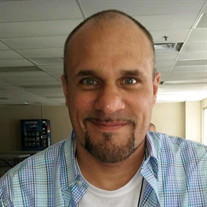 Chance Wayne Barboza was born on January 15, 1973 in Monroe Michigan. He is the son of his beloved mother Georgina Barboza of Monroe Mi. And father Melvin (Denise) Barboza of Cook Michigan. Chance went home to be with the Lord on April 21, 2020. He will be having a reunion with his Grandmothers (Tina Bellestri, Nancy Barboza) his Grandfathers (George Naftzger, Maximano Barboza) also other Uncles, Aunts and Cousins. Chance was always the life of the party so I’m sure they will be happy to see him. Chance was raised on a farm in LaSalle Michigan where he had spent much time making great memories raising cows, pigs, chickens, goats and black labs. As a child and young adult he also enjoyed hunting and fishing with his dad and brother. Chance attended Mason Consolidated Schools in Erie before moving in his teens to attend Monroe High. However, he never really liked school. Instead, he opted to learn the trade of carpentry and also worked as a Union Laborer to support himself. There was nobody quite like Chance, he had one of the biggest hearts and most loving souls ever. Chance was also well known and loved for his great sense of humor. He enjoyed making people laugh and smile. Another skill he had obtained during his lifetime was his ability to do some fairly decent impressions. One in particular impression was from the 90s sitcom ALF. People loved to hear him say “Here kitty, kitty, kitty.” Other than impressions Chance also had a love for very loud music. (Beatles, Bob Seger, Lynyrd Skynyrd, Led Zeppelin, Tupac and Biggie were some of his favorites) He loved good movies, documentaries, motorcycles, poetry, building things, landscaping, and working on cars. (He was know as the brakes specialist) Chance also had a love affair with food. He was once kicked out of China Buffet for eating too much. His favorites were bean burritos with sour cream from Taco Bell, pizza, pasta, his sisters egg rolls and steak with a large glass of Mountain Dew. You could literally watch light dance in Chances eyes when there was good food in front of him. Other than his parents, he leaves to cherish his memories his beloved daughters Tia Cheatham and Nevaeh Barboza both of Monroe. Sis Melina Barboza of Monroe. Brother Justin (Dana) Barboza of Monroe. Sis Marisa Barboza of Monroe. 4 Nephews Avery, Dayton, Victor and Tanner. 8 Nieces Cece, Celina, Gabby, Samantha, Lillie, Chloie, Hadlie and Alivia. 2 Great Nieces Elina and Elicia, 2 Great Nephews Kaine and Punk. Also Clarence Harrell whom he called his brother for many years. Chance will always be remembered as a man who deeply loved his family, as he made it a point to say it every “chance” he had. He will forever be missed. Private services have been held, and a public celebration of Chance’s life is being planned for the future, when social distancing restrictions have been lifted.

Chance Wayne Barboza was born on January 15, 1973 in Monroe Michigan. He is the son of his beloved mother Georgina Barboza of Monroe Mi. And father Melvin (Denise) Barboza of Cook Michigan. Chance went home to be with the Lord on... View Obituary & Service Information

The family of Chance Wayne Barboza created this Life Tributes page to make it easy to share your memories.

Send flowers to the Barboza family.