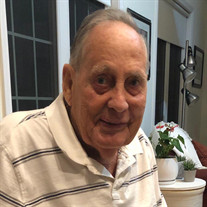 Carl Leon Sweatt, 90 years, of Monroe, Michigan, went home to be with the Lord on Monday, June 29, 2020 at the home of his son and daughter in law, Carl and Jenise Sweatt, in Holland, Ohio. Born September 6, 1929 in Monroe, Leon was the son of the late Swann L. and Lillie M. (Petree) Sweatt. He served his country honorably and proudly as a Military Policeman in the United States Army. He was stationed in Germany. On August 3, 1952, Leon married his beloved wife, the former Ruby Evelyn Livesay in Tazewell, Tennessee, Sadly, she preceded him in death on August 7, 2017 after 65 years of marriage. Leon worked as a truck and hi-lo driver for Ford Motor Company’s Monroe plant for 36 years. He retired in 1987. Leon was a member of UAW Local 723 and the Ford Motor Company Golf League at Dundee Golf Club. He enjoyed hunting, gardening. playing golf and was quite the storyteller. He also had a passion for animals, especially cats. Throughout the years, Leon owned and loved being on the open road, riding his Harley Davidson’s. Most of all Leon loved time spent with family. Leon is survived by two loving children; Carl Lee (Jenise) Sweatt, whom he made his home with in Holland, OH, and Cynthia Sue (Floyd) Yeary of Ida, MI, seven cherished grandchildren; Macy, Christian, and Caleb Yeary, Megan (Christopher) Rennert, and Ian, Emma and Casey Sweatt. two treasured great grandchildren; Logan and Evelyn Rennert, five siblings; Nadine Bowers of Monroe, Buddy (Linda) Sweatt of Kokomo, IN, Verlin (Barb) Sweatt of Temperance, MI, Novie (Bert) Atkins of Florida, and Wilma Bondie of Toledo and his cat, Gatsby. In addition to his parents and beloved wife, Leon was preceded in death by a sister, Hattie Mushing. Due to the COVID19 Virus all services will be private and he will be entombed next to his wife at Roselawn Memorial Park. Memorial contributions are suggested to Monroe County Humane Society. Bacarella Funeral Home, 1201 S. Telegraph Rd. Monroe, Michigan, 48161 is assisting Leon’s family with funeral arrangements.

Carl Leon Sweatt, 90 years, of Monroe, Michigan, went home to be with the Lord on Monday, June 29, 2020 at the home of his son and daughter in law, Carl and Jenise Sweatt, in Holland, Ohio. Born September 6, 1929 in Monroe, Leon was the... View Obituary & Service Information

The family of Carl Leon Sweatt created this Life Tributes page to make it easy to share your memories.

Send flowers to the Sweatt family.