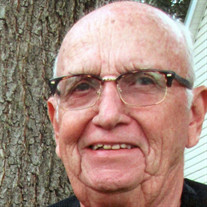 Carl E. Stoddard, age 87 of Monroe, passed away at 4:05 p.m. Wednesday, April 14, 2021 at the IHM Senior Living Community. Born January 27, 1934 in Monroe, Carl was the son of the late Earnest F. and Grace E. (Kuns) Stoddard. He graduated from Monroe Catholic Central High School in 1952 and married Marjorie A. Straub on August 8, 1953 at St. Michael Catholic Church. Who knows what it’s like… …to take up golf at 5 yrs. of age, in a few years become a caddy, then in 1958 to hit a hole-in-one at Westburn Golf Club? Carl knew. …to pile a family of nine into a station wagon then haul a pop-up camper to Copper Mountain or Florida? Carl knew. …to teach their kids to play Euchre and know it would be a legacy? Carl knew. …to go “up north” and hunt morel mushrooms then sit around the campfire at Chris’ farmhouse in Mancelona, MI? Carl knew. …to volunteer for hospice, then years later need their services to put yourself at peace? Carl knew. In addition, Carl was a member of the Monroe Council 1266 Knights of Columbus. As a member, he was an avid Knights League bowler. He also was active with Goodfellows charitable programs. Carl was in the Apprenticeship Program with the Ford Motor Company and became a Tool and Die Maker. He began his career at the Ford Stamping Plant in Monroe and ended his career as an engineer with the Ford Plant in Nuevo Laredo, MX. Carl retired after 40 years of service. He continued to tinker on cars long after he retired! For several years he lived in Seadrift, Texas. Carl was a member of United Methodist Church where he assisted with their food distribution program. He also served as President of the Seadrift Chamber of Commerce. A life full of memories for those left behind. Carl is survived by his wife, Marjorie; six children: David Stoddard, Thomas Stoddard, and Gregory Stoddard, all of Monroe, Michael Stoddard of Seguin, TX, Julia (Noel) Fleck of Temperance, and Jane (James) Appleman of Newport; daughter-in-law, Linda Stoddard of Monroe; brother, Charles (Sandra) Stoddard of Monroe; brother-in-law, Elmer Schulz of Intermediate Lake, MI; 12 grandchildren and 15 great-grandchildren. In addition to his parents, Carl was preceded in death by a son, Christopher on June 15, 2020; sisters, Grace (Harold) Roe, Margaret (Robert) Allor, Marion (Robert) Van Slambrouck, and Virginia Schulz. Cremation has taken place in accordance with Carl’s wishes. His family will receive visitors from 3 p.m. until services at 7 p.m. Monday, Apr. 19th at Bacarella Funeral Home. Rev. Larry Detruf will officiate. For anyone wanting to make a memorial donation, the family suggests supporting the "Carl Stoddard Memorial Scholarship Fund" at Monroe County Community College. Donations can be sent to Josh Myers, Ed.D, 1555 S. Raisinville Rd., Monroe, MI 48161.

The family of Carl E. Stoddard created this Life Tributes page to make it easy to share your memories.

Send flowers to the Stoddard family.