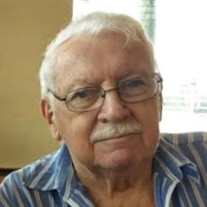 Burton Reed Lutz, 84 of Fort Pierce, FL, formerly of Dearborn Heights, MI passed away peacefully, Wednesday, July 15, 2020, at the home of his daughter, Lynne, of Monroe, MI. Born November 3, 1935 in Ann Arbor, MI, Burt was the son of the late Vernor and Jean (Dingman) Lutz. He married Sharon Laraway on March 23, 1956 in Belton, Texas. Sharon preceded him in death on September 1, 2015. In addition to his parents and wife, Burt was preceded in death by his brother, Marshall Lutz. Burt is survived by his son, Kurt Lutz of Bluffton, OH, daughter Lynne (Jack) Ingison of Monroe; two brothers, Sheldon (Linda) Lutz of Fort Pierce, FL and Terrence (Jean) Lutz of Fox Lake, IL; seven grandchildren and four great-grandchildren. Burt retired from Ford Motor Company after 30 years. He was a mechanic at the Service Research Center in Dearborn, MI Burt served in the U.S. Army from June 7, 1954 to June 5, 1956, during which time he was deployed to Korea, earning the National Defense Service Medal and the Good Conduct Medal. Burt was a member of American Legion Post 40 in Fort Pierce. As a universal blood donor, Burt was avid about donating blood for the American Red Cross for many years. He was a fan of the Detroit Tigers, Detroit Lions and enjoyed traveling. His hobbies included hunting, fishing and camping with family and friends. Bacarella Funeral Home is assisting the family by fulfilling Burt’s request to be cremated with interment at Great Lakes National Cemetery in Holly, Michigan. In memory of Burt, the family suggests supporting the American Red Cross by making a memorial donation or becoming a blood donor.

The family of Burton Reed Lutz created this Life Tributes page to make it easy to share your memories.

Send flowers to the Lutz family.