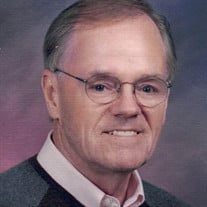 Buel A. Campbell, 84 years, of Monroe, Michigan, went home to be with the Lord on Tuesday, August 6, 2019 at Aspen Grove Assisting Living in Lambertville, Michigan. Born August 31, 1934 in Garrett, Kentucky, Buel was the son of the late Harry and Elsie L. (Bailey) Campbell. He was a 1951 graduate of Garrett High School where he was the class Valedictorian. He went on to attend both the University of Kentucky and Wayne State University in Detroit. Buel served his country honorably and proudly in the United States Air Force. He served from August 1, 1952 to July 31, 1956. On August 22, 1959 Buel married the love of his life, the former Patricia L. Carter, at Monroe Missionary Baptist Church in Monroe. The ceremony was performed by the Rev. E. E. Patterson. Buel worked as a cost estimator for Ace Paper Company in Monroe for 20 years and at Hinkle Manufacturing in Perrysburg, OH for 20 years. He retired in 2003. Buel was a member of Monroe Missionary Baptist Church, where he served as a Deacon and a Trustee. He was a Charter Member of Dundee Baptist Church, where he served as Treasurer and a Charter Member of Heritage Baptist Church. Buel enjoyed golf, rose gardening, reading, and spending the winters at the Villages in Florida. Buel is survived by his beloved wife of nearly 60 years; Pat, his brother; Bueford E.(Becky Brett) Campbell of Monroe and several nieces and nephews. In addition to his parents, Buel was preceded in death by a sister; Jeannine Ridener. Visitation will be held on Friday from 3-8 PM in the Bacarella Funeral Home, 1201 S. Telegraph Rd., Monroe, MI, 48161. On Saturday, August 10, 2019 he will lie in state at Monroe Missionary Baptist Church from 10:00 am until funeral services celebrating his life at 11:00 am. Rev. Roy Southerland will officiate. Entombment will follow at Roselawn Memorial Park, where the VFW Post 1138 will conduct military honors. Buel’s family would like to thank all the employees at Aspen Grove and Promedica Hospice for their wonderful care. Memorial donations are suggested to a charity of the donors choice.

Buel A. Campbell, 84 years, of Monroe, Michigan, went home to be with the Lord on Tuesday, August 6, 2019 at Aspen Grove Assisting Living in Lambertville, Michigan. Born August 31, 1934 in Garrett, Kentucky, Buel was the son of the late... View Obituary & Service Information

The family of Buel A. Campbell created this Life Tributes page to make it easy to share your memories.

Send flowers to the Campbell family.