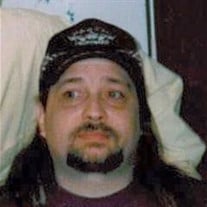 Bryan M. Leach, 54 years of Monroe, passed away at his home 1:06 a.m. Monday, November 4, 2019. He had been in poor health for two and a half years. Born March 23, 1965 in Monroe, he was the son of late Huie and Hazel (Turner) Leach. Bryan attended Monroe High School, and later worked as a laborer for North Star Steel, medically retiring in 1993. Bryan married his beloved wife, Rochell Rowlett, on September 23, 1989 in Monroe. Bryan was a member of the Motor City Car Club. In his spare time, he enjoyed spending time with family and friends, building and working on cars, especially his 1972 Chevrolet Vega and 1984 Ford Mustang. Bryan spent many hours building his Mustang from the ground up. To cherish his memory, Bryan leaves behind his wife Rochell Leach of Monroe; four children: Bryan Lynch, David Leach, Curtis Leach, Dylan Leach all of Monroe; three siblings: Mark (Becky) Leach, Tammy Leach, David (Michelle) Leach all of Monroe; and three grandchildren. He was proceeded in death by his parents, grandparents, several aunts and uncles. Memorial contributions in his memory are suggested to the family. In accordance with Bryan’s wishes, cremation has already taken place and memorial visitation will be held from 3 p.m. until services celebrating his life begin at 7 p.m. on Thursday, November 7, 2019, at Bacarella Funeral Home, 1201 S. Telegraph Road, Monroe, MI, 48161.

The family of Bryan Mitchell Leach created this Life Tributes page to make it easy to share your memories.

Send flowers to the Leach family.