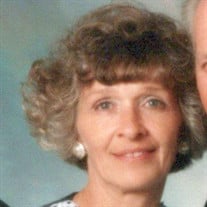 Bonnie Jo Riggs, age 79, of Monroe went home to be with her Lord and Savior on Sunday July 12, 2020 peacefully in her home surrounded by her children. She was born March 5, 1941 in Monroe to Floyd H. and Margaret B. (Waitman) Steinbrecher. Bonnie attended Trinity Lutheran School K-8th grade where she was baptized and confirmed. She was a member of the class of 1959 at Monroe High School, where she was a cheerleader, on the synchronized swimming team and in the ushers club. It was there where she met the love of her life, Tommy “Wildhorse” Riggs. They were married March 21st, 1959 in a small ceremony in his sister’s home. He preceded her in death on June 3, 2008. She was employed at Mercy Memorial Hospital from 1974 and retired in 1992. She enjoyed her full time hobby of attending and being a part of her grandchildren’s recitals, sporting events, school activities and most importantly their “Nonnie” and their best friend. She enjoyed volunteering at the Damascus House and when telling her grandchildren where they were going, she would refer to it as her “special store”. She loved her family and enjoyed spending time with her grandchildren. She was mostly known as being a wife, daughter, mother, sister, aunt, nonnie, teacher, best friend, kind, generous, compassionate, honest, humble, selfless, forgiving, authentic and most of all, she demonstrated the true meaning of unconditional love. She is survived by her three children, Todd (Angie) Riggs, Eric Riggs and Regan (John) Taormina all of Monroe, two sisters, Kaye (Ted) Sautter of Indiana and Sally (George) Hess of Monroe; grandchildren Derick, Dustin, Shalyn, Chavis, Challon, Chandyn, Arrias, Alexz, Gino, Niko, Giovanni; great grandchildren Dylon, Dayton, Dextin, Darika, Jayla, Rylan, Ryriyae, Olivia and one great great grandson Kingston. In addition to her husband, she is preceded in death by her parents; son, Thomas Riggs; daughter, Rhonda Minton and sister, Bessie Schell. The family will receive guests from 2 to 8:00 p.m. Thursday July 16, 2020 at Bacarella Funeral Home, where services will be held at 11:00 a.m. Friday. Burial will follow at Roselawn Memorial Park, LaSalle. All guests are asked to follow the Governor’s New Executive Order requiring face coverings to be worn in buildings and to also practice social distancing. Online condolences and special memories may be shared with the family by visiting the obituary page at www.bacarellafuneralhome.com.

Bonnie Jo Riggs, age 79, of Monroe went home to be with her Lord and Savior on Sunday July 12, 2020 peacefully in her home surrounded by her children. She was born March 5, 1941 in Monroe to Floyd H. and Margaret B. (Waitman) Steinbrecher.... View Obituary & Service Information

The family of Bonnie Jo Riggs created this Life Tributes page to make it easy to share your memories.

Bonnie Jo Riggs, age 79, of Monroe went home to be with her Lord...

Send flowers to the Riggs family.