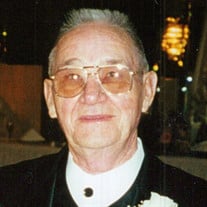 Bige C. Henry, 90 years, a lifelong resident of Monroe, Michigan, went home to be with the Lord on Thursday, November 18, 2021. Born February 1, 1931 in Monroe, Bige was the son of the late Lon F. and Martha J. (Sulfridge) Henry. He was baptized, confirmed, and was a long time member of St. Joseph Catholic Church in Monroe. On April 18, 1953, Bige married his beloved wife, the former Mary H. Bomia at St. Joseph Catholic Church. Sadly, she preceded him in death on August 2, 2015 after 62 years of marriage. Bige served his country honorably and proudly as a Corporal in the United States Army, during the Korean War. He served in the 72nd Tank Battalion, 3rd Armored Division Tank Commander. He was also the head cook. For his heroism, Bige received the National Defense Service Medal, Korean Service Ribbon and the United Nations Service Medal. Bige worked for the City of Monroe for over 35 years. He retired in 1990 as a Skilled Mason. Bige was a member of St. John the Baptist Catholic Church and the VFW Post 1138 both in Monroe. He enjoyed playing Nintendo, especially “Zelda” and fishing. In his younger days he enjoyed playing baseball and softball. He was an excellent cook, with his specialty being various soups. Most of all Bige loved time spent with family. Bige is survived by a loving daughter and son in law, Allyce A. (Michael) Henry – Paselk of Ida, a cherished grandson, Edward Russel (Misty) Henry of Monroe, eight treasured great grandchildren: Cody, Haily, Feliscity, Mary Jane, Edward, Jr., Raelynn, Katelyn, and Kiley, and an adored great great granddaughter, Phoebe. In addition to his beloved wife and parents, Bige was preceded in death by a sister, Edith Maniaci and three brothers: James, Ethard, and Monroe. Visitation will be held on Friday from 1-8 pm at Bacarella Funeral Home, 1201 S. Telegraph Rd., Monroe, Michigan, 48161 where, the Rosary will be recited at 6:00 pm that evening. On Saturday, November 27, 2021, he will lie in state at St. John the Baptist Catholic Church at 10:00 am where Mass of the Resurrection celebrating his life will begin at 11:00 am. Fr. David Burgard will be the celebrant. Entombment will follow at St. Joseph Cemetery in Monroe, where the VFW Post 1138 will conduct military honors. Memorial contributions are suggested to St. John the Baptist Catholic Church or St. Jude Children’s Hospital. Online condolences and special memories may be shared with the family by visiting he obituary page at www.bacarellafuneralhome.com.

Bige C. Henry, 90 years, a lifelong resident of Monroe, Michigan, went home to be with the Lord on Thursday, November 18, 2021. Born February 1, 1931 in Monroe, Bige was the son of the late Lon F. and Martha J. (Sulfridge) Henry. He was... View Obituary & Service Information

The family of Bige C. Henry created this Life Tributes page to make it easy to share your memories.

Send flowers to the Henry family.