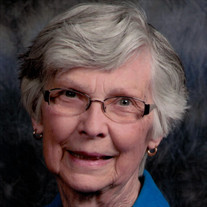 Barbara (Oliver) Pillarelli, 83, of LaSalle, went home to be with the Lord on Wednesday, November 14, 2018. She had been in poor health for one and a half years. Born October 2, 1935, in Allegan, Michigan, she was the daughter of the late Seth J. and Dorothy (Luce) Oliver. She grew up in Erie and graduated in 1953 from Monroe High School. Barbara attended Monroe County Community College, studying Italian and Computer Technology. She married Anthony J. Pillarelli on October 3, 1953 at First Presbyterian Church in Monroe. Sadly, he preceded her in death on September 6, 2009. Barbara began working for Monroe Auto Equipment in 1955. In her thirty-eight years of service she held many positions, such as: Bookkeeper, Executive Secretary, and Administrative Assistant. She retired from Tenneco in 1993. Barbara was a life-long member of First Presbyterian Church and served as an Elder and Deacon. She also volunteered in the office and with community meals. Barbara enjoyed gardening, reading, knitting and traveling within the United States and Europe. To cherish her memory, Barbara leaves three children: Mark (Patricia) Pillarelli of Vonore, Tennessee, Karen (Fred) Essary of Monroe and Ann Pillarelli of Monroe; eight grandchildren: Chris Essary, Casey (Sara) Essary, Kelli (Andy) Boldyreff, Rachelle (Ryan) English, Andrew Pillarelli, Lynsey Pillarelli, Jenny (Zac) Calamante and Cory Hunley; four great-grandchildren: Emily and Anthony Essary and Owen and Samuel English. She is also survived by one brother, James (Kathleen) Oliver of Grand Rapids, Michigan and many nieces and nephews and her cuddle buddy, Mickey. In addition to her parents and husband, she was preceded in death by her brother, Ralph Oliver; sister, Mary L. Zarend; and great-granddaughter, Finley English. Visitation will be held on Sunday, November 18, 2018, from noon until 6 p.m. at Bacarella Funeral Home, 1201 South Telegraph Road, Monroe, MI, 48161. Funeral services will be held at 11 a.m. on Monday, November 19, 2018, also at Bacarella Funeral Home. Entombment will follow at Roselawn Memorial Park, LaSalle. Memorial contributions in Barbara’s memory are suggested to St. Joseph Mercy Hospice.

Barbara (Oliver) Pillarelli, 83, of LaSalle, went home to be with the Lord on Wednesday, November 14, 2018. She had been in poor health for one and a half years. Born October 2, 1935, in Allegan, Michigan, she was the daughter of the late... View Obituary & Service Information

The family of Barbara L. Pillarelli created this Life Tributes page to make it easy to share your memories.

Send flowers to the Pillarelli family.