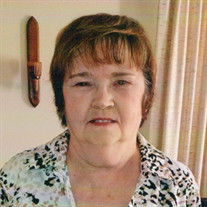 Barbara Faye “Bobbie” Navarre, age 72, of Monroe, passed away Thursday, February 24, 2022. Bobbie was born March 24, 1949, in Monroe, she was the daughter of Austin Roger and Evelyn Loretta (Campbell) Cosby. She married Roger D. Navarre May 15, 1970 in Monroe. She was a graduate of Monroe High School and went on to earn her nursing degree and worked as a registered nurse at Memorial Hospital, Mercy Memorial Hospital and the I.H.M. Motherhouse until her retirement in 2004. Bobbie was a member of Monroe Missionary Baptist Church and the Joy Choir. She enjoyed bowling, baking, playing cards and family games, crocheting, and fishing. She looked forward to her annual girls trip to Louisville with her sister and her best friend. Her favorite thing to do was spend time with her children and grandchildren. She is survived by her husband of 51 years, Roger Navarre; her mother Loretta Cosby of Monroe; two children, Autumn (Chris) Collins and Jeffery Navarre both of Monroe; sister, Linda (Donald “Casey”) Jones of Monroe; two grandchildren, Courtney (Jeremy) Fazely and Christopher Collins, Jr., two great grandchildren, Aiden and Blake and her lifelong best friend, Connie Keck Brown of Columbia, TN. She is preceded in death by her father and an infant daughter. Visitation will be held Monday, February 28, 2022 from 4 to 8 p.m. at Bacarella Funeral Home, 1201 S. Telegraph Rd., where funeral services will be held Tuesday at 11 a.m. Rev. Roy Southerland and Rev. Tim Iocoangeli will officiate. Burial will follow at Roselawn Memorial Park. Memorial contributions are suggested to Monroe Missionary Baptist Church or ProMedica Hospice.

The family of Barbara F. "Bobbie" Navarre created this Life Tributes page to make it easy to share your memories.

Send flowers to the Navarre family.