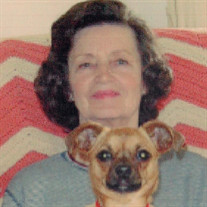 Barbara Ann Matthews, a lifelong resident of Monroe, Michigan, went home to be with the Lord at the age of 90 on Saturday, April 17, 2021. She had been a resident of Wellspring Lutheran Services. Born on November 1, 1930, Barbara was the daughter of William and Marcella (Soncrant) Park of Monroe. Barb was a 1948 graduate of the Saint Mary Academy. She married Austin C. “Matt” Matthews on June 27, 1953, in the Saint Mary Catholic Church. She was preceded in death by her parents and her brother, William. Her beloved husband also preceded her in death on October 19, 1996. Early in her life, Barb was employed as a clerk at Consolidated Paper Company, Northside Plant. In 1963, Barb and her husband, Matt, purchased the former Harry's Auto and Home Store in the Monroe Shopping Center. In 1972, they moved the business to 1211 South Monroe Street and changed the name to Harry's Cycle Sales and Service. Barb continued to manage the business after her husband's health issues forced him to retire. Barb was then employed at the Meijer store in Monroe for many years. Upon her retirement, she became a volunteer in the gift shop at Mercy Memorial Hospital. In earlier years, Barb enjoyed entertaining and traveling with her husband, as well as spending time with their cherished dogs. In her later years, Barb enjoyed gardening, attending church and being with her little dog, Schroeder. She liked being active and spending time with her friends and neighbors, many of whom became her extended family. “Barbie” will be missed by her “sisters”, Betty Kinder and Janice Musarelli, and her “kids”, Denise (Kinder) Biro, Kelli Kinder, Brent Musarelli and Alexa (Musarelli) Kehres, as well as by their children. She will also be missed by cousins, Cindy Reed of Palm Harbor, FL and Joan Farnum of Okemos, MI. Barb was well known for her happy nature, sense of humor and especially for her distinctive laughter. Burial with private graveside services were held at St. Joseph Cemetery in Monroe on Wednesday, Apr. 21st. Deacon Mike Stewart of St. Mary Catholic Church officiated. Bacarella Funeral Home assisted the family with funeral and burial arrangements.

Barbara Ann Matthews, a lifelong resident of Monroe, Michigan, went home to be with the Lord at the age of 90 on Saturday, April 17, 2021. She had been a resident of Wellspring Lutheran Services. Born on November 1, 1930, Barbara... View Obituary & Service Information

The family of Barbara Ann Matthews created this Life Tributes page to make it easy to share your memories.

Send flowers to the Matthews family.