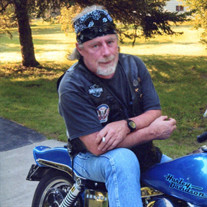 Arthur F. “Arty” Felix, age 62, of Monroe, went home to be with the Lord on January 28, 2020 at Henry Ford Wyandotte Hospital. He had been seriously ill for one month. Born January 20, 1958 in Wyandotte, Michigan, he was the son of the late Robert C. and Shirley A. (Kidd) Felix. He attended Flat Rock High School and worked for Norfolk Southern and an Engineer for twenty years. Arty loved spending time outdoors. Whether it be riding his Harley, sailing on his boat, camping, or hunting, he was at home with the sun on his back. He was an extremely generous person often helping friends and family out of any jam. Arty lived the phrase, “He would give the shirt of his back.” Arty was proud to be an organ donor and continued giving in death just as he did in life. He met the love of his life and fiancé, Amy Shopshire, at a friend’s house. The two went on their first date a few days later and have been inseparable ever since. To cherish his memory, Arty leaves his loving fiancé, Amy; two stepchildren, Erin (Jason Frayer) Johnson and Mack (Tiffany Mason) Johnson, both of Monroe; one nephew, Douglas N. Duford of Wyandotte; One brother, Steven Felix of Flat Rock; four step-grandchildren: Shelby Johnson, Carter Johnson, Kaylee Johnson and Macey Johnson, with one more little boy on the way. He also leaves a very close friend, Isaiah Zenz, a young man Arty mentored. In addition to his parents, he was preceded in death by a sister, Melanie Fowle. Visitation will be held from 2 p.m. until 7 p.m. Sunday, February 2, 2020, at Bacarella Funeral Home, 1201 S. Telegraph Road, Monroe, MI, 48161. He will lie in state at 10 a.m. Monday, February 3, 2020, at Stewart Road Church of God, where services celebrating his life will begin at 11 a.m. The church Pastor, Rev. Keith Hawes, will officiate. Interment will follow at Roselawn Memorial Park. In lieu of flowers memorial contributions in Arty’s memory are suggested to the family. Online condolences and special memories may be shared with the family by visiting the obituary page at www.bacarella funeralhome.com.

Customized sympathy cards. Mailed for you.