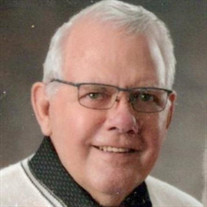 Arthur Douglas England, 79 years, of Monroe, Michigan, went home to be with the Lord on Monday, August 16, 2021 at Brookdale Senior Living in Monroe. Born May 4, 1942 in Middlesboro, Kentucky, Doug was the son of the late Tilman and Bertha (Cochran) England. After graduating high school, Doug attended college at LMU. He later went on to receive his bachelor’s degree in accounting from Eastern Michigan University. Doug served his country honorably and proudly in the United States Air Force. Doug served from January 19, 1962 to July 16, 1965. After his discharge he moved to Monroe. On September 16, 1967, Doug married his beloved wife, the former Patsy C. Lester, at Monroe Missionary Baptist Church. Doug worked as an accountant for Ford Motor Company’s Woodhaven Stamping Plant for 30 years, retiring in 2000. Doug was a Charter Member of Liberty Missionary Baptist Church in Monroe, where he served as Deacon and Treasurer for 30 years. He was also a member for Monroe Lodge #27, F&AM. Doug enjoyed being outside, tending to his bees, fruit trees, garden and yard. He also enjoyed canning and golfing. Most of all he enjoyed time spent with family. Doug is survived by his beloved wife of 53 years Pat, two loving children: Kevin D. (Crystal) England of Carleton, MI and Kelly D. England of Broomfield, CO, two cherished granddaughters: Sydni and Emaline, a brother, JD (Barbara) England of Knoxville, TN and a sister, Mary (Henry) Massengill of Harrogate, TN. In addition to his parents, Doug was preceded in death by a brother, Gene and a sister, Betty Dobbs. Visitation will be held on Friday, August 20, 2021, from 12:00 pm at Bacarella Funeral Home, 1201 S. Telegraph Rd., Monroe, MI 48161, where funeral services celebrating Doug’s life will begin at 2:00 pm. Rev. Wm. Robert Baltrip will officiate. Private interment will be held at Roselawn Memorial Park. Memorial contributions may be made to a charity of the donors choosing.

Arthur Douglas England, 79 years, of Monroe, Michigan, went home to be with the Lord on Monday, August 16, 2021 at Brookdale Senior Living in Monroe. Born May 4, 1942 in Middlesboro, Kentucky, Doug was the son of the late Tilman and Bertha... View Obituary & Service Information

The family of Arthur Douglas England created this Life Tributes page to make it easy to share your memories.

Send flowers to the England family.