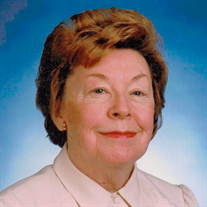 After a long life, Annetta Frances Kelley died on September 28, 2019 at the IHM Senior Living Center in Monroe, where she had made her home since February 2011. The daughter of James Joseph Kelley Sr. and Frances Louise (Golden) Kelley, she was born in Monroe on March 3, 1915. She graduated from St. Mary Academy and then pursued her undergraduate education at Marygrove College in Detroit. Following completion of college, Annetta began a social-work career with the County of Monroe, then commuted to Toledo for several years doing publicity work. She later returned to social work for the State of Michigan. Concurrently with her professional career she attended the University of Michigan where she earned two Master of Arts degrees, the first in Literature in 1946, and the second in Education in 1981. Throughout the years Annetta had numerous literary works published. After thirty two years of employment and retirement from the State of Michigan, Annetta began the pursuit of a Doctor of Philosophy degree in 1985 at the University of Toledo. Receiving her doctoral degree in 1991, she taught at the university for twelve years. Annetta often said they were the happiest years of her life. Annetta’s love of travel began as a child with annual summer family vacations to York Beach, Maine. As an adult she toured the European continent and visited the British Isles, China, Hong Kong, Japan, Thailand and Russia. She was a lifelong member of St. John Catholic Church. In celebration of the church’s 125th anniversary, Annetta authored the book, “A History of St. John the Baptist Catholic Church”. Service to the parish also included several years as a member of the church’s Parish Council. Her affiliations included the University of Michigan’s Women’s Alumnae Club of Monroe, the Altrusa Club as well as committee involvement for the Monroe Chapter of the American Red Cross. Annetta valued education, family time, attending daily Mass and reading. She was generous in sharing time with her nieces and nephews; teaching them to draw and paint, playing games, and sharing week-long family vacations each summer, most often along the shores of Lake Huron. Although Annetta rarely discussed ancestry, she appreciated the fact that both sides of her family were early settlers of the Monroe area. Her great-grandfather, Owen Kelley and his wife Roseanne, are certified by the State of Michigan as settlers prior to 1833. Similarly, another great-grandfather, Toussaint Soleau, is recorded as a leader during the Monroe area’s first settlement at Brest Bay. Annetta was preceded in death by her parents, her brother, James J. Kelley Jr., her sister-in-law, Loretta G. Kelley and a nephew, Paul F. Kelley. She is survived by her nieces and nephews; James (Jennifer) Kelley, Loretta (Terrence) Bronson, Patricia (Dwight) Bowman, Maureen Kelley, David (Julia McArthur) Kelley, Michael (Elise Hoffman) Kelley, Anne (Daniel) Brahier and Teresa (Gerald) March, as well as thirty one great nieces and nephews and twenty four great, great nieces and nephews. On Saturday, October 5, 2019 she will lie instate at St. John the Baptist Catholic Church from 9:00 am until Mass of the Resurrection celebrating her life at 10:00 am. Fr. Kevin Roelant will officiate. Interment will follow at St. Joseph Catholic Cemetery in Monroe. Memorial offerings in Annetta’s name can be made to St. John Catholic Church, the IHM Sisters or SMCC scholarship fund. The Bacarella Funeral Home, 1201 S. Telegraph Rd., Monroe, Michigan is assisting Annettta’s family with funeral arrangements.

After a long life, Annetta Frances Kelley died on September 28, 2019 at the IHM Senior Living Center in Monroe, where she had made her home since February 2011. The daughter of James Joseph Kelley Sr. and Frances Louise (Golden) Kelley,... View Obituary & Service Information

The family of Annetta Frances Kelley created this Life Tributes page to make it easy to share your memories.

After a long life, Annetta Frances Kelley died on September 28,...

Send flowers to the Kelley family.