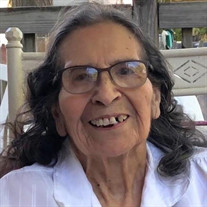 Anita M. Morales, age 96 of Monroe, passed away at 11:45 a.m. Wednesday, June 3, 2020 in her home. She had been under the care of Grace Hospice during her declining health of the past six months. Born on July 26, 1923 in Laredo, Texas, Anita was the daughter of the late Gumercindo and Juanita (Arriaga) Medellin. She married Pedro G. Morales on April 22, 1945 in Laredo, Texas. Pedro preceded her in death on January 3, 2007. A devoted homemaker and mother of seven children, Anita enjoyed cooking, sewing, gardening and attending her children’s sporting activities. A dedicated hard worker, she also worked 20+ years at Howard Ternes Packaging in Monroe as a Print Operator. Anita was a longtime member of St. Michael Catholic Church where she attended Mass for many years. Anita is survived by her children: Casandra Maria Liedel of Monroe, Dennis Morales of Durham, North Carolina, Marcella Morales of Monroe, Romain Morales of Durham, North Carolina, Rene (Jill Morton) Morales of Temperance, Mario (Tammy) Morales of Monroe, and Alonzo Tito Morales of Monroe; two brothers, Daniel Medellin of Buena Park, California and Guadalupe Medellin of Carson, California; nine grandchildren and five great-grandchildren. In addition to her parents and husband, Anita was also preceded in death by three brothers, David Ochoa, Joseph Medellin and Gumercindo Medellin. Cremation will take place in accordance with family wishes. Family and friends may visit from 11 a.m. to 1 p.m. Monday at Bacarella Funeral Home where a memorial service will begin at 1 p.m. Deacon Michael Stewart of St. Mary Catholic Church will officiate. In appreciation for the loving care given to their mother, the family would like to especially thank Peggy, her Daily Caregiver. Also, the staff of Grace Hospice by requesting memorial donations be made to their organization.

The family of Anita M. Morales created this Life Tributes page to make it easy to share your memories.

Send flowers to the Morales family.