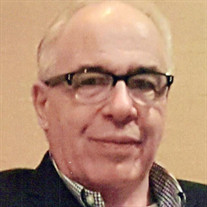 Angelo J. Benvenuto, 73 years, a lifelong resident of Monroe, Michigan went home to be with the Lord on Wednesday, October 27, 2021, peacefully in his home surrounded by his family. Born February 12, 1948, in Monroe, Angelo was the son of the late Fred and Anna (Carrabino) Benvenuto. He was baptized and confirmed at St. John the Baptist Catholic Church. He attended St. John Elementary School and was a 1966 graduate of Monroe Catholic Central High School. Angelo served his country honorably and proudly as a medic in the United States Air Force from May 1, 1967, to April 23, 1971during the Vietnam War. He was stationed in San Antonio, TX and overseas in Taiwan from 1970 - 71. He was very proud of his service in the Air Force, and one of his most memorable trips was to Washington D.C. in 2012 with group of his fellow veterans to participate in the Wreath Laying Ceremony on the Tomb of the Unknown Soldier. Angelo was always a very caring man. It was this caring heart that led him to pull his Corvette over on a night in 1971 to help a young lady with car trouble. A year later on May 5, 1972, Angelo would marry this young lady, the former Louise Ann Liedel, at St. John the Baptist Catholic Church. Angelo worked for the City of Monroe for 28 years, retiring in 2003 as the Maintenance Supervisor for Parks and Recreation Department. After retirement he worked as a bartender for Green Meadows Golf Course ensuring that his friends and fellow golfers stayed properly hydrated. Angelo was a lifelong member of St. John the Baptist Catholic Church, a member of Knights of Columbus Monroe Council 1266, VFW Post 1138, and AMVETS. In his younger years he played softball for various teams in Monroe, one of which would go on to win a State Championship in the late 1970’s. He truly loved the game of golf, successfully winning the Green Meadows Club Championship several times throughout his years. More importantly, he treasured the time spent making memories playing golf with his sons and many life-long friends, who he loved so much. Angelo also enjoyed bowling, fishing, and crossword puzzles. Above all, Angelo enjoyed spending time with his family and most importantly with his four granddaughters, whom he lovingly called “Papa’s Girls”. Angelo is survived by his beloved wife of 49 years, Louanne, two loving sons: Nicholas J. (Christie) and Joseph J. Benvenuto, both of Monroe, four cherished granddaughters: Lily Freese, and Gianna, Bailey, and Gabriella Benvenuto, a brother, John (Tami) Benvenuto of LaSalle and a sister Tina Marie (Robert) Custer of Monroe. Visitation will be held on Monday from 2-8 pm in the Bacarella Funeral Home, where at 6:00 pm the VFW Post 1138 will conduct military honors. On Tuesday, November 2, 2021, he will lie in state at St. John Baptist Catholic Church from 10:00 am where Mass of the Resurrection celebrating his life will begin at 11:00 am. Fr. David Burgard and Deacon Mike Stewart will be the celebrants. Private interment will be held at St. Joseph Cemetery in Monroe. Memorial contributions are suggested to St. Jude Children’s Hospital or The Wounded Warrior Project. Online condolences and special memories may be shared with the family by visiting the obituary page at www.bacarellafuneralhome.com.

Angelo J. Benvenuto, 73 years, a lifelong resident of Monroe, Michigan went home to be with the Lord on Wednesday, October 27, 2021, peacefully in his home surrounded by his family. Born February 12, 1948, in Monroe, Angelo was the son... View Obituary & Service Information

The family of Angelo J. Benvenuto created this Life Tributes page to make it easy to share your memories.

Send flowers to the Benvenuto family.