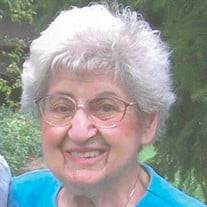 Alice (Arshalus) Kalorian , 103, of Monroe, died peacefully at 11:02 p.m. at Wellspring Lutheran Services, Monroe, on Wednesday, October 16, 2019. Born October 10, 1916 in Troy, New York, she was the daughter of Arshak and Sophie (Bulbulian) Hofhanesian. The family later moved to Michigan where they lived in Detroit, Monroe, and later in Pinckney where Alice attended high school. Alice married Arsen Kalorian, September 2, 1935 on his family farm in Monroe where they resided throughout their marriage. Alice worked alongside Arsen, in tending the animals, working in the fields, and growing flower and vegetable gardens. For a short time, she worked for Boes Interiors, sewing custom-made draperies. She was a wonderful homemaker and talented seamstress who made many of her daughters’ clothes. She taught sewing for 4-H for several years. She was also accomplished at crocheting, cooking, baking, and preserving produce from their garden. She helped bake pies and cookies as well as cooking and working at the Sandy Creek concession at the Monroe County Fair. She was active in her children’s school activities and organizations. Among her greatest joys were her grandchildren and great-grandchildren who she treasured and for whom she always had time. She always welcomed friends and neighbors into her home and joyfully served them. She could effortlessly produce a table filled with delicious food, snacks, and refreshments without notice. Alice’s strong faith in and love for her Lord Jesus Christ provided her with strength when she was faced with life’s challenges. She was a member of Holy Ghost Lutheran Church, Monroe and St. Sarkis Armenian Apostolic Church, Dearborn. Alice was preceded in death by her husband of 73 years; two infant sons; five sisters, Rose (John) Jernukian, twin sister Lucy (John) Manoulian, Elizabeth (Albert) Boyajian, Mary (Vern) Laitinen, Sophie Hofhanesian; two brothers, Andrew Hofhanesian, and John (Chrisoula) Hofhanesian. She is survived by two daughters, Margaret (Gary) Banning of Monroe , Mary Ann (Joe) Zychowicz of Monroe; four grandchildren, Sarah (Dustin) Leach of Monroe, Jacob Longton (Lauren Tanabe) of Detroit, Seth Longton of Monroe, and Chelsea (Jabril) Kalorian-Muhammad of Virginia Beach, Va.; seven great-granchildren, Claire and Charlie Leach, Lola Kalorian and Mariah Kalorian-Muhammad, Henry Longton, Grace and Lucy Tanabe-Longton; six step-grandchildren and 13 step-great-grandchildren; several nieces and nephews, including a special niece, Betty Manoulian, who helped care for her; a sister, Margaret (Lloyd) Baker of Grass Lake Michigan. Family and friends may visit from 2 p.m. to 7 p.m. Sunday, Oct. 20th at Bacarella Funeral Home. Alice will lie in state at 10 a.m. Monday at Holy Ghost Lutheran Church where services will be held at 11 a.m. The church pastor, Rev. Lee Cullen will officiate followed by burial at Gethsemane Cemetery. In lieu of flowers donations may be made to Holy Ghost Lutheran Church or Gabby's Grief Center. Online condolences and special memories may be shared with the family by visiting the obituary page at www.bacarellafuneralhome.com.

The family of Alice A. Kalorian created this Life Tributes page to make it easy to share your memories.

Send flowers to the Kalorian family.