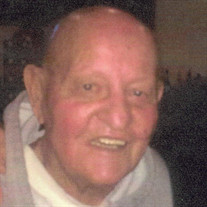 Long time swim coach and M.H.S. school teacher, Alex Steve died at 94 years old. November 2, 1925 to December 13, 2019 Alex Steve passed away comfortably in his own home Friday morning at the age of 94. He leaves his daughter, Marianne Steve of Maui, HI and son Donald Paul (D.P) Steve (Kim) of La Salle to mourn his passing. He will be sadly missed by his grandchildren, Alexa Steve and Lauren Steve of La Salle and Mahana Merrill of Maui, HI. He was preceded in death by his former wife, Marge (Goff) Steve and daughter Christine Steve. His parents, George and Mary (Pallis) Steve, brothers, Christy Steve and Harry Steve. Alex was a lifetime member of the VFW Post 1138. A veteran of World War II, Alex served in the U.S. Army Air Corp. from Nov. 20, 1943 until being honorably discharged on Mar. 9, 1946. He was awarded the Asiatic Pacific Theater Ribbon and the American Theater Ribbon, “Coach” Steve was born November 2, 1925 in Dover, OH to Greek immigrant parents. Alex excelled in both swimming and track and field while graduating from Canton McKinley High School. After serving his country, he graduated from Bowling Green State University where he was a Mid American Conference finalist in swimming. In 1949-1950 he received his M.S. degree and was the freshman swim coach for BGSU. The following year he became the assistant swim coach at Ohio University serving until 1952. That year, Alex became the head coach of swimming and cross country at Monroe High School, a position that he held from 1952-1981 compiling a 284-164 record in swimming for MHS. In doing so he coached 23 High School All-Americans. Coach Steve was inducted into the Monroe High School Hall of Fame, the Canton Ohio Hall of Fame and received the Matt Mann award for the State of Michigan honoring his career in the sport of swimming. Coach also served for 20 years as the head coach of the Sylvania “Sea Lions” in Sylvania, Ohio where he won every dual meet but one over that 20 year period. At Sylvania Country Club, he coached three National Record Holders: Gretta Fleck, National Woman’s 50 Free Champion, Nancy Westhoven 50 Breast Record Holder and Jaime O’Hara who set the National 6 under and 8 under 25yd Free Records. Alex also coached Jim Behren of Sylvania who was the last man to defeat Mark Spitz (world record holder) in a dual meet. Behren defeated Spitz in both the 50 and 100 yd freestyle during 1969’s dual meet between Indiana University and Ohio State University. Former Swim Coach, Ron Evans who swam for coach and coached with him as an assistant from 1974-1981 called his “coach” the finest man I ever met. Coach Steve has had an enormously positive influence on many, many young men and women. ‘He could teach a rock to swim’ and made champions out of young Monroe swimmers for many years! “I know of 100’s of his former swimmers who kept in touch and still today call him Coach. “We will never forget him” Family and friends may visit from 2 p.m. to 7 p.m. Saturday and 2 p.m. until time of service at 4 p.m. Sunday at Bacarella Funeral Home. Chaplain Mike Gilbert of ProMedica Hospice will officiate in conjunction with military honors provided by Monroe VFW Post 1138. Cremation will follow in accordance with his wishes. Memorial donations are suggested to the Melinda M. Curley Memorial Scholarship Fund at University of Toledo Foundation (www.utfoundation.org). Online condolences and special memories may be shared with the family by visiting the obituary page at www.bacarella funeralhome.com.

The family of Alexander Steve created this Life Tributes page to make it easy to share your memories.

Send flowers to the Steve family.