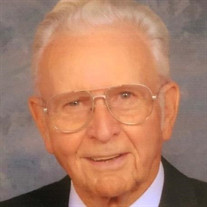 A.B. Jackson, 95 Years, of Wyandotte, Michigan, went home to be with the Lord on Saturday, November 2, 2019 at Henry Ford Wyandotte Hospital. Born January 25, 1924 in Altoona, Alabama, A.B. was the son of the late Albert and Tara (Wright) Jackson. He grew up in Alabama and was raised by his Aunt and Uncle, Vertie and William Elrod A.B. served his country honorably and proudly in the United States Army during WWII. He served in the European Theater from May 28, 1943 to March 29, 1946. For his valor he received the American Service Medal, Good Conduct Medal, World War II Victory Medal, and European – Africa – Middle Eastern Service Medal with 2 Bronze Stars. On April 7, 1946 A.B. married his beloved wife, the former Frances I. Branham in Alabama, Sadly, she preceded him in death on April 12, 1997 after 51 years of marriage. A.B. was employed by Great Lakes Steel as a Furnace Inspector from which he retired in 1986. He was a member of the Riverview Church of God where he served as a Deacon and Usher. He was a very active at the church and served as the church handyman. He was also a member of Woodhaven Free Will Baptist Church. A.B. enjoyed fishing, photography, woodworking, and remodeling homes with his son Kenny. He truly could fix, repair, or make anything. He will be remembered as a true man of God who passed down an incredible legacy to his children and grandchildren. He loved time spent with family. A.B. is survived by five loving children; Don (Shelia) Jackson of Marietta, GA, Ron (Brenda) Jackson of Monroe, Ken (Teresa) Jackson of Trenton, MI, Sheila (Tim) Kearney of Wyandotte, MI and Sherry (Dave) Clingerman of Gibraltar, MI, ten cherished grandchildren; Brian (Kathy) Jackson, Jeff (Erin) Jackson, Casey (Deja) Jackson, Jennifer (Chris) Brown, Kelli (Frank) Giarmo, Ryan (Kristy) Jackson, Joshua Jackson, Rachel (Ryan) Kearney, Patrick (Hannah) Kearney, and Mary Kearney, and 12 treasured great grandchildren; Branum, Tyler, Gabbi, Brooklynn, Bailey, Julie, Austin, Griffin, Jackson, Kennedy, Kendall, and Alex and a sister; Mary Tyler. In addition to his parents and Aunt and Uncle, A.B. was preceded in death by siblings; Almas, Talmas “Hood”,Berta Mae and Bertie. Visitation will be on Wednesday form 3-8 PM in the Bacarella Funeral home, 1201 S. Telegraph Rd., Monroe, MI, 48161 where funeral services celebrating his life will be held on Thursday, November 7, 2019 at 11:00 AM. The V.F.W. Post 1138 will begin with military honors followed by the Rev. Keith Hawes, pastor of Stewart Road Church of God. He will be interred next to his wife at Mt. Hope Cemetery. Memorial contributions are suggested to a charity of the donor’s choice.

A.B. Jackson, 95 Years, of Wyandotte, Michigan, went home to be with the Lord on Saturday, November 2, 2019 at Henry Ford Wyandotte Hospital. Born January 25, 1924 in Altoona, Alabama, A.B. was the son of the late Albert and Tara (Wright)... View Obituary & Service Information

The family of A.B. Jackson created this Life Tributes page to make it easy to share your memories.

Send flowers to the Jackson family.